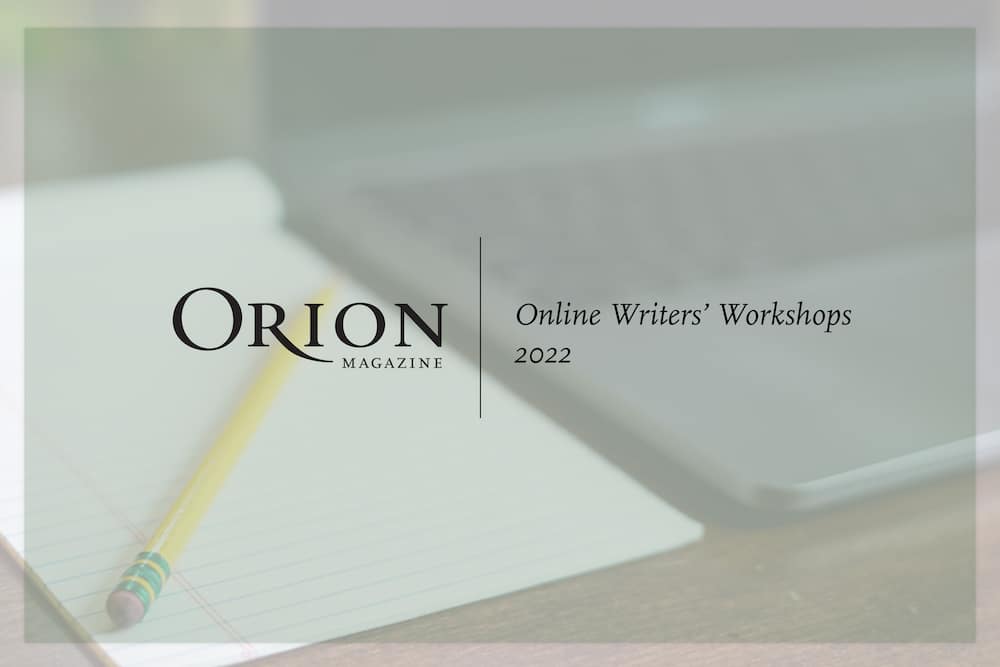 This year, Orion is hosting regular Online Environmental Writers’ Workshops in poetry and nonfiction. This unique opportunity lets you maintain social distance, while improving your writing skills from home. Connect with us for six to eight sessions with an experienced instructor and writer. Learn more about environmental writing, and renew, illuminate, and deepen your relationship with nature and place.

Conducted over Zoom (or similar platform) and limited to twelve participants, the workshops will feature a combination of generative exercises, craft talks, readings, special guest appearances, and workshopping of student manuscripts. Individual workshops vary, but students can likely expect to spend several hours a week reading, writing, and commenting on work outside of class.

Each Zoom course is available for $500. Workshop classes meet in either six three-hour installments or eight two-hour installments. Payment within five days of acceptance will guarantee your spot. Cancelations up until a week before the start of the course will result in a full refund. After that, refunds will be conditional on our ability to fill your spot before the course begins.

These workshops tend to be quite competitive. Please send a cover letter and your best nonfiction writing sample of up to 1,500 words or up to five pages of poetry to the Submittable button in the instructor’s workshop page. Sample writing can be published or unpublished, and might, but probably will not be used in class. You are welcome to apply to more than one workshop at a time.
Applicants will be notified whether they have been admitted within one to two weeks of the application deadline.

Marcelo Hernandez Castillo is a poet, essayist, translator, and immigration advocate. He is the author of the collection Cenzontle, which won the 2017 A. Poulin Jr. prize, and the chapbook Dulce. His memoir, Children of the Land, is his most recent publication. His work has appeared or been featured in The New York Times, PBS Newshour, People Magazine en Español, The Paris Review, Fusion TV, Buzzfeed, Gulf Coast: A Journal of Literature and Fine Arts, New England Review, and Indiana Review, among others. He currently teaches in the Low-Res MFA program at Ashland University.

Hannah Dela Cruz Abrams received the 2013 Whiting Writers Award for her novella The Man Who Danced with Dolls and her memoir-in-progress The Following Sea. She has been further supported by a Rona Jaffe National Literary Award and a North Carolina Arts Council Fellowship. Her work has appeared in Orion, the Oxford American, StoryQuarterly, The Pinch, Southern Humanities Review, and elsewhere. Abrams currently teaches in the Department of English at the University of North Carolina Wilmington. 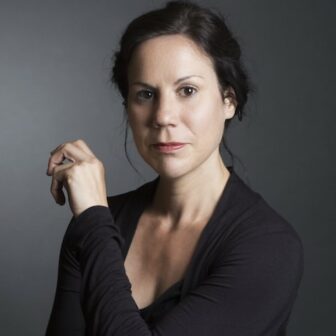 Jennifer Elise Foerster is the author of Leaving Tulsa and Bright Raft in the Afterweather. Her third book of poetry, The Maybe-Bird, is forthcoming from The Song Cave in 2022. Jennifer served as the Associate Editor of When the Light of the World Was Subdued, Our Songs Came Through: A Norton Anthology of Native Nations Poetry. She earned her PhD in English and Literary Arts from the University of Denver, is the recipient of a NEA Creative Writing Fellowship, a Lannan Foundation Writing Residency Fellowship, and was a Wallace Stegner Fellow in Poetry at Stanford. Her poetry has recently appeared in POETRY London, The Georgia Review, Kenyon Review and other journals. Jennifer currently teaches at the Rainier Writing Workshop and is the Literary Assistant to the U.S. Poet Laureate, Joy Harjo. She grew up living internationally, is of European (German/Dutch) and Mvskoke descent, and is a member of the Muscogee (Creek) Nation of Oklahoma. She lives in San Francisco. Photo by Richard Blue Cloud Castaneda. 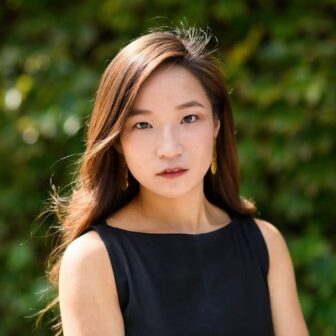 Moeko Fujii is a writer and a critic whose work has appeared in The New Yorker, Aperture, the Criterion Collection, The Point, and elsewhere. She has an MFA in creative nonfiction from Columbia and a BA from Harvard College, and has received scholarships from Tin House, the Bread Loaf Writers’ Conference and Kundiman. She currently writes the film column “Green Screen” for Orion, and calls New York and Tokyo home. 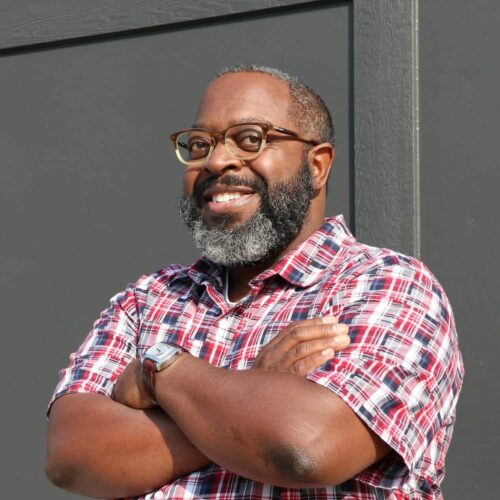 Michael Kleber-Diggs is a poet, essayist, literary critic, and arts educator. His debut poetry collection, Worldly Things, won the 2021 Max Ritvo Poetry Prize from Milkweed Editions.. Michael’s essays have been anthologized in There’s a Revolution Outside My Love: Letters from a Crisis, the forthcoming A Darker Wilderness: Black Nature Writing from Soil to Stars, and elsewhere. Michael is married to Karen Kleber-Diggs, a tropical horticulturist and orchid specialist. Karen and Michael have a daughter who is pursuing a BFA in Dance Performance at SUNY Purchase.

Keetje Kuipers is the author of three books of poems:  Beautiful in the Mouth, which was chosen by Thomas Lux as the winner of the A. Poulin, Jr. Poetry Prize, The Keys to the Jail, and All Its Charms, which was a finalist for the Washington State Book Award and includes poems honored by publication in both The Pushcart Prize and Best American Poetry anthologies. Keetje’s poetry and prose have appeared in Narrative, Tin House, Virginia Quarterly Review, The New York Times Magazine, American Poetry Review, Orion, The Believer, and over a hundred other magazines. Keetje has been a Wallace Stegner Fellow at Stanford University, the Katharine Bakeless Nason Fellow in Poetry at Bread Loaf, and the recipient of multiple residency fellowships including PEN Northwest’s Margery Davis Boyden Wilderness Writing Residency. Keetje is Visiting Professor of Creative Writing at the University of Montana and Editor of Poetry Northwest.

Amy Irvine is a sixth-generation Utahn and descendant of notorious Mormons. Her memoir, Trespass: Living at the Edge of the Promised Land, received the Orion Book Award, Ellen Meloy Desert Writers Award, and the Colorado Book Award. Desert Cabal: A New Season in the Wilderness, is a feminist response to western wilderness icon Edward Abbey’s Desert Solitaire, and was included in Orion magazine’s 25 Most-Read Stories of the Decade, Outside’s Adventure Canon, and Backpacker’s New Wilderness Classics. Her second memoir, Almost Animal, is forthcoming by Spiegel & Grau. Irvine lives and writes off-grid in southwest Colorado. She is a contributing editor for Orion and teaches both fiction and nonfiction in the Mountainview Low-Residency MFA Program at Southern New Hampshire University. 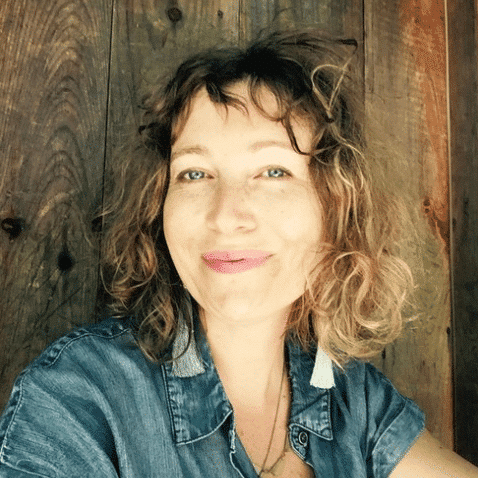 Robin Marie MacArthur lives in a solar-powered house on the hillside where she was born in Southern Vermont. Her debut collection of short stories, Half Wild, won the 2017 PEN New England award for fiction and was a finalist for both the New England Book Award and the Vermont Book Award. Her debut novel, Heart Spring Mountain, was an IndieNext Selection and a finalist for the New England Book Award. Both her books have been translated into French and published by Albin Michel in France. Robin’s stories and essays have appeared in Orion magazine, LitHub, Hunger Mountain, Shenandoah, and on NPR. Her essay “Sugaring” has been included in two Orion anthologies: To Eat with Grace and Old Growth. She teaches at Vermont College of Fine Arts’ MFA in Writing. and has taught in many nontraditional settings throughout the US including the Bread Loaf Environmental Writers’ Conference. 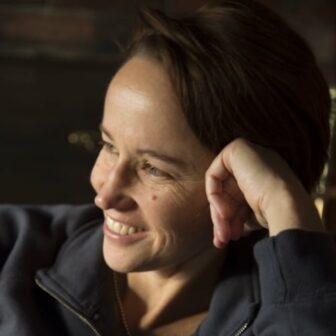 Anne Haven McDonnell lives in Santa Fe, NM and teaches as an associate professor in English and Creative Writing at the Institute of American Indian Arts. Her work has been published in Orion, The Georgia Review, Narrative Magazine, The American Journal of Poetry, Nimrod, Terrain.org, and elsewhere. Her work won the fifth annual Terrain.org poetry prize, second place for the 2019 international Gingko Prize for Ecopoetry, and second place for the Narrative Magazine’s Twelfth Annual Poetry Prize. She is the author of the chapbook Living with Wolves and her new collection Breath on a Coal, will be out in September with Middle Creek Publishing. Anne serves as an assistant poetry editor for the online environmental journal Terrain.org. She holds an MFA from the University of Alaska, Anchorage and has been a writer-in-residence at the Andrews Forest Writers’ Residency and the Sitka Center for Art and Ecology. 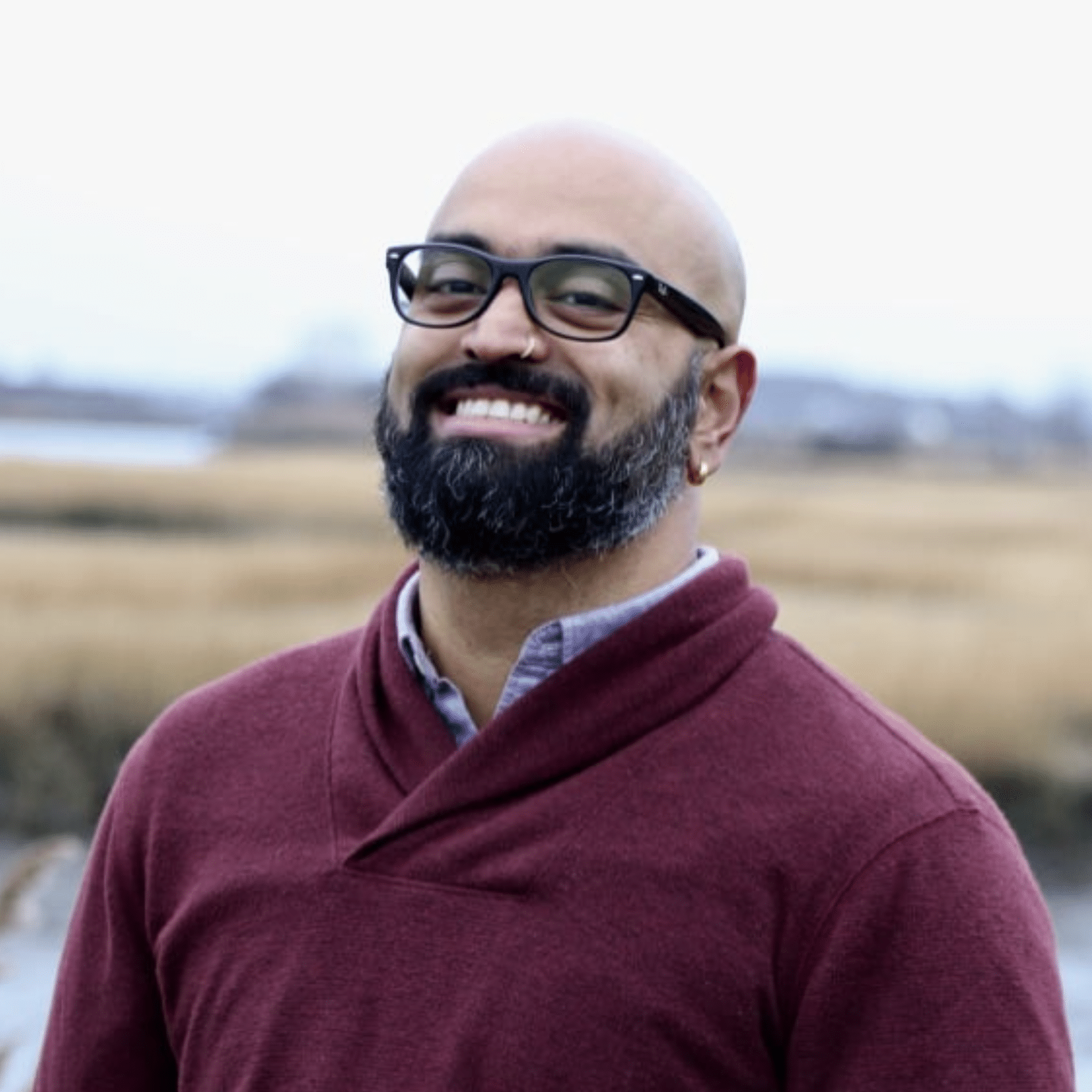 Rajiv Mohabir is an Indo-Caribbean American author of three acclaimed poetry collections, The Taxidermist’s Cut, Cowherd’s Son, and Cutlish; a book of translation, I Even Regret Night; and his hybrid memoir, Antiman. He is winner of the 2015 Kundiman Prize, a 2015 PEN/Heim Translation Fund Grant, a finalist for the 2017 Lambda Literary Award in Gay Poetry, and has received fellowships from Voices of Our Nationʻs Artist foundation, Kundiman, The Home School, and the American Institute of Indian Studies language program. He received his MFA in Poetry and Translation from Queens College, CUNY, and his PhD in English from the University of Hawai`i. Rajiv is currently a professor at Emerson College. More at www.rajivmohabir.com. 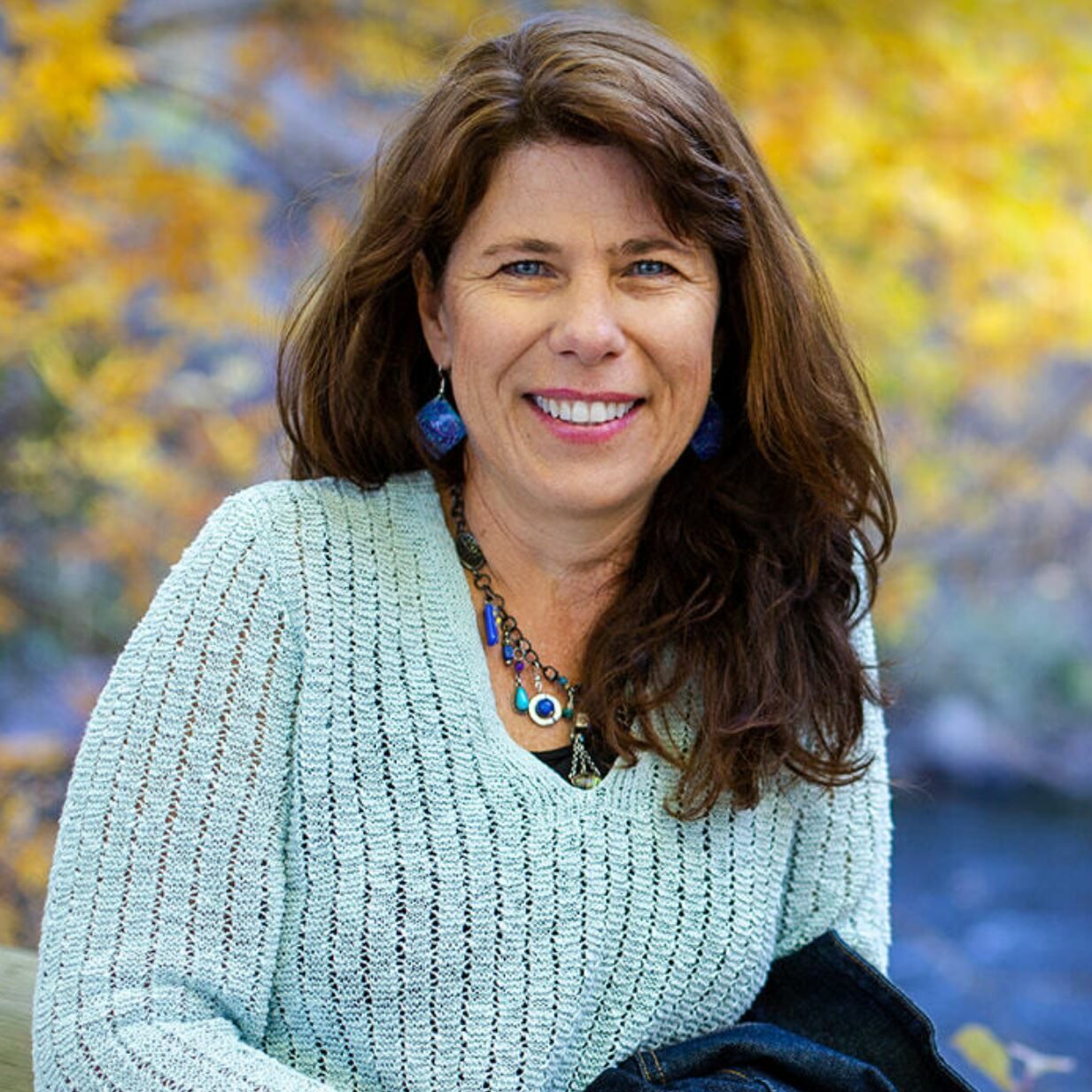 Laura Pritchett is the author of five literary novels (Counterpoint, Milkweed), two nonfiction books, one play, and is the editor/co-editor of three environmental anthologies. She’s had over 300 pieces of fiction and nonfiction published, many of which are experimental in nature. She teaches at workshops around the country and directs the low-residency MFA in Nature Writing at Western Colorado University. She holds a PhD from Purdue and has long focused on environmental writers, particularly those in the American West. She believes that the future of writing will be collaborative and experimental; that is where the energy lies, and for good reason. More at www.laurapritchett.com. 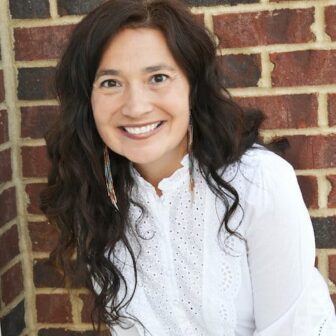 Felicia Zamora is the author of six poetry books including, I Always Carry My Bones, winner of the 2020 Iowa Poetry Prize (University of Iowa Press, 2021), Quotient (forthcoming from Tinderbox Editions, 2022), Body of Render, Benjamin Saltman Award winner (Red Hen Press, 2020), and Of Form & Gather, Andrés Montoya Poetry Prize winner (University of Notre Dame Press). A CantoMundo and Ragdale Foundation fellow, she won the 2020 C.P. Cavafy Prize from Poetry International, the Wabash Prize for Poetry and the Tomaž Šalamun Prize. Her poems appear or are forthcoming in AGNI, Alaska Quarterly Review, American Poetry Review, Boston Review, Georgia Review, Guernica, Missouri Review Poem-of-the-Week, Orion, Poetry Magazine, The Nation, and others. She is an assistant professor of poetry at the University of Cincinnati and associate poetry editor for the Colorado Review.

Other former instructors include: