I first met Elizabeth Rush when we were roommates for a Metcalf fellowship that got us to a Climate Adaptation Workshop in Missouri in 2015. We quickly realized how much our histories and interests overlapped, from once living amid the big trees of Oregon right down to tromping down the same flood-ravaged streets of Staten Island after Hurricane Sandy with reporter’s notebooks in hand. It’s with great interest that I’ve followed her progress in turning the Staten Island story, and so many others across the country, into her new book RISING: Dispatches from the New American Shore. In it, she gives voice to the people in communities most vulnerable to storm surges and sea level rise as they wrestle with how to respond.

On a hike this spring through a New England forest, we picked up our ongoing conversation about journalism, storytelling, and what it means for people to remake their lives when the shores they inhabit are transforming around them.

MS: How did the book Rising come about? What were you thinking about professionally and personally, and how did that answer the question of why you should write this book now?

ER: Back in early 2012, Le Monde Diplomatique sent me to India and Bangladesh to report on the completion of the world’s longest border fence. As it turned out the fence was more of a technicality. Sea level rise and water sharing were much more pressing concerns. While my article mentioned this briefly, the work itself continued to haunt me. When I returned to the United States I felt I could see what those whose lives were not dependent upon coastal land could not––that the very shape of our shore was changing. I went in search of someplace in the United States where sea level rise was playing out in the present moment, which is how I ended up in Louisiana.

At that very moment, my life was sort of falling apart. I had just broken off an engagement to the man I was supposed to marry. I moved out and was living in a rented room in Crown Heights. All of my things were in storage. Often I think this helped me to see the transformation of coastal land and those living atop it from a deeply personal lens. I became interested in the question of how a person can stay in a place, even when the place itself is changing irrevocably and how, when the time comes, they learn to let go of the places they love. In Louisiana I realized that erosion, saline inundation, and land loss, these very scientific phenomenon, were deeply transforming both the land and the inner worlds of those who had lived there for centuries. 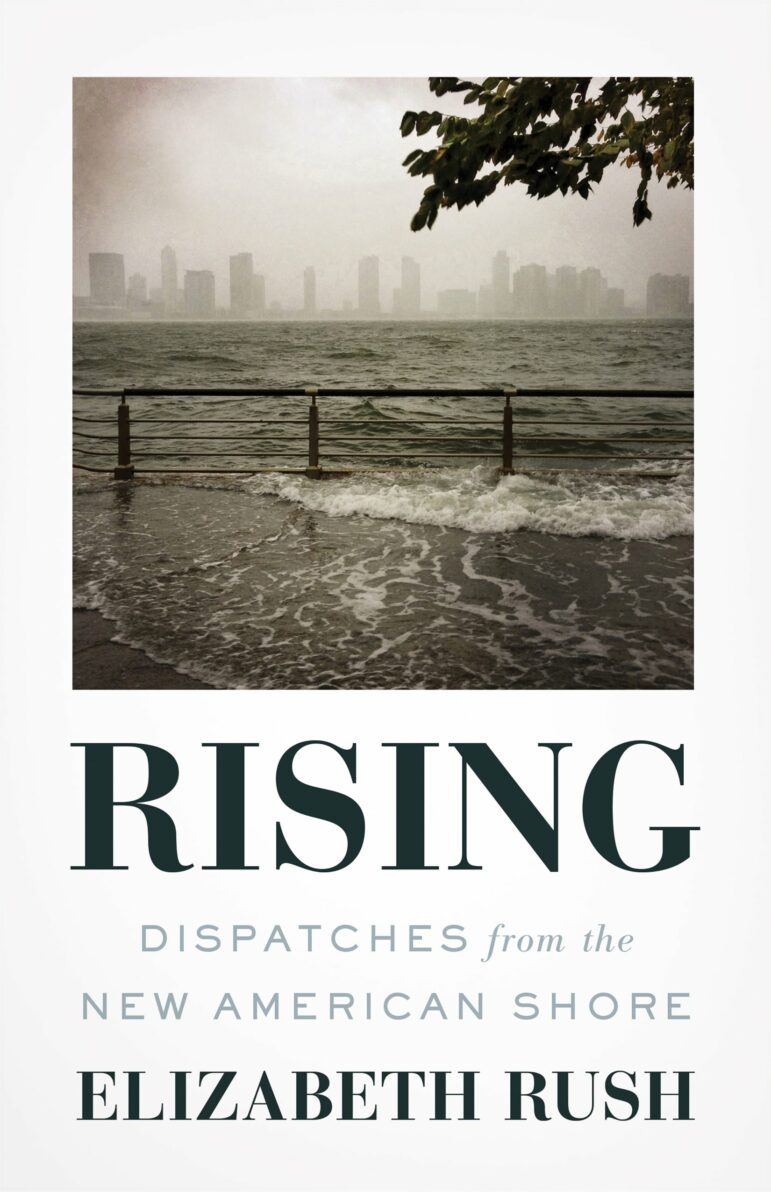 MS: In Rising you regularly cross the climate divide to report from frontline communities that question human-made climate change even as they witness accelerating environmental change. Can you talk about this part of your reporting process?

ER: In Rising I wanted to draw close to the places where climate change is being felt now, in the present moment. More often than not, along the coast, these are communities that are not being buffered by big-budget infrastructure projects. They are rural communities where residents have long made a living off their relationship with the land itself. These are communities that have not traditionally been directly engaged by environmental writers and thinkers, though I do think this is certainly changing, thanks in part to the election and columns like yours, “Middle Ground” at Inside Climate News.

Many in the communities I worked in were not keen to use the words “climate change” to talk about their particular experiences. They were happy to talk about changes in the environment but “climate change” felt too politically loaded. They would admit that winters were getting warmer and that they were flooding worse, year after year. Some would say they did think humans were causing it, while others would demur, saying something like, “I am not a scientist so I don’t know what is causing the flooding.”

To be honest, I met very few people who denied the phenomenon outright. Instead they refused to use the terminology. And who can blame them? The words “climate change” are so entrenched in political discourse at this point that they fail to describe what direct experience with climate change feels like. The term itself does not describe how difficult it is, for instance, to watch the land where your father grazed cattle fall into the sea. 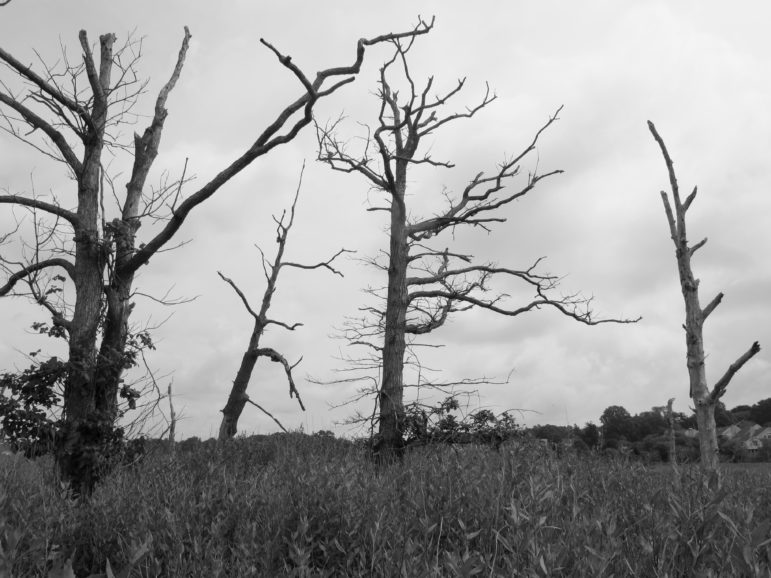 MS: What changes or surprises did you or your sources witness over the five years of writing Rising?

ER: During the time it took me to write this book many of the predictions of how high sea levels could rise by 2100 have doubled. Put another way: it is not just that sea levels are rising, but the rate at which they are rising is speeding up too. Significantly. Back in 2011, when I really started to dig into the subject, most reports I were modeling three scenarios: a low rate of rise, a middle rate, and a high rate of rise. Usually the high rates of rise would max out at about plus three feet predicted by 2100 and today the higher rate scenarios often max out at about six feet of rise by 2100.

A recent study published by the Proceedings of the National Academy of the Sciences, which is based not on predictive models but on observational data, confirm this fact. It states: “if sea level continues to change at this [new] rate and acceleration, sea-level rise by 2100 will be more than double the amount if the rate was constant.” And some scientists think that even six feet by 2100 is a fairly conservative estimate, given what we know about how fast seas have risen in the historic past: often in rapid surges, jumping as much as fifty feet in three short centuries.

The people I interviewed for this book bear witness to these changes. They have watched many of their beloved coastal communities begin to be transformed by higher tides and stronger storms. “Our area has been flooding progressively worse year after year: more frequently, more often,” Frank Moszczynski of the Staten Island Alliance told me. “Before Sandy, which was the five hundred year storm, there was Irene, which was a two hundred year storm. The year before that we had a three hundred year storm. In less than three years we got over one thousand years of wild weather.”

That weather has increased flooding so mightily in his neighborhood that Frank and his neighbors banded together to petition the State to purchase and demolish their homes. And you know what? The citizens won. That little community in Staten Island is now participating in one of the most progressive climate change adaptation strategies known as “managed retreat.” 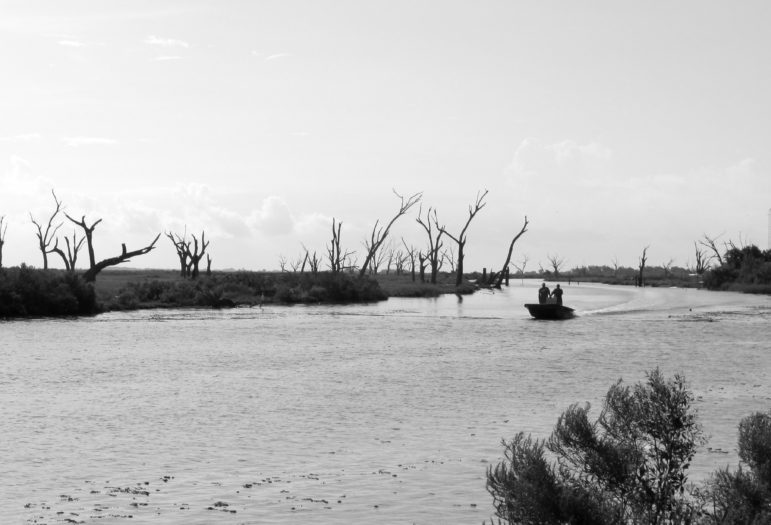 MS: Tell me more about these more radical approaches towards conservation and adaptation, especially given the recent findings that suggest that, for instance, the West Coast’s tidal wetlands will drown by 2110 if human communities don’t move up and in.

ER: In the past, when sea levels dropped, the marsh dropped down too, and when they rose the marsh rose with them. If you were to take an aerial time-lapse photo of the process of marsh migration, it would look as if the tidal wetlands and the ocean were moving in and out together, the way desire follows the desired. But today so many of our human communities are sited right up against the farthest inland edges of these marshes, impeding their ability to migrate. This means that, as sea levels rise, these tidal marshes will, unless we relocate, drown in place. Nearly fifty percent of the endangered species in the United States are wetland dependent, which is one of the biggest reasons why I would like to see conversation around managed retreat, like what is taking place in those communities in Staten Island, gain traction in the public debate.

One newer approach to conservation is called “conserving the stage,” and it suggests that if we want to keep a diversity of plant and animal life thriving on our changing planet, we need to begin to set aside areas that are rich in geophysical variation. That’s because, as the earth warms, species are on the move, many relocating up in elevation or poleward at a respective rate of thirty vertical feet and eleven miles every decade.

The idea behind “conserving the stage” is that we need to create arenas where evolution can continue to unfold. Instead of setting aside selected areas (a particular national park) or ecosystem types (wetlands refuges) as monuments to an idea of nature that is no longer tenable, we need to think about working on behalf of the physical factors that foster biodiversity in the first place: soil types, hydrology, landform variation, and, above all else, topography.

MS: John Holdren, Obama’s science advisor, famously said, “We basically have three choices: mitigation, adaptation, and suffering.” Which of these felt most dominant to you as you wrote this book?

National efforts toward mitigation are dwindling. Today many of the battles are being taken up at the state and local level. But Rising itself doesn’t really take on mitigation. Again, I wanted to think about what human and more-than-human communities living in and around wetlands do when there are not a lot of resources being made available.

This leaves us with few options: retreat or perish in place. I personally think of human retreat as a radical form of resilience. Not only does it allow more-than-human wetland communities the chance to move in, it is also proof of how adaptable we humans really are. We can learn to let go of the places we love. We can remake our lives in different locations. We will have to.

Often while writing I came back to something John Bear Mitchell, a Penobscot scholar and member of the Penobscot Nation, told my students back in 2015. He said, “Within a single human existence things are disappearing from the earth, never to be seen again. In Passamaquoddy [Maine] our sacred petroglyphs—those carvings in rock that were put there thousands of years ago—are now being put under water by the rising seas. We’ve seen this happen for a long time—this diminishing of our natural resources—through climate change and invasive species. The losses have been slow and multigenerational. We have narrowed our spiritual palettes and our physical palettes to take what we have. But the stories, the old stories that still contain a lot of these elements, hold on to the traditional. For example, our ceremonies and language still include the caribou, even though they don’t live here anymore. Similarly, we know the petroglyphs still exist, but now they’re underwater. The change is in how we acknowledge them.”

Elizabeth Rush is the author of Rising: Dispatches from the New American Shore and Still Lifes from a Vanishing City: Essays and Photographs from Yangon, Myanmar. Her work has appeared in the New York Times, the Washington Post, Harpers, Guernica, Granta, Orion, and the New Republic, among others. In 2019 she will deploy to the Thwaites Glacier in Antarctica as the National Science Foundation’s Artist and Writer in Residence. She received her MFA in nonfiction from Southern New Hampshire University, and teaches creative nonfiction at Brown University. Read more of her work on Orion.

Meera Subramanian is a contributing editor of Orion, award-winning journalist, former MIT Knight Science Journalism fellow, and author of A River Runs Again: India’s Natural World in Crisis. She just completed Finding Middle Ground, a series exploring perceptions of climate change across America for InsideClimate News. You can find her at www.meerasub.org