Editor’s Note: This article is a follow-up to “Biking with Butterflies,” included in the Summer 2019 issue.

For 10,200 miles the monarchs were my guide. They provided the route. They were my teachers.

By watching a caterpillar eat corn-on-the-cob style from a milkweed leaf, I was taught about the evolutionary arms race playing out in ditches across their range.

By watching a tattered female—wings more sky than orange—lay an egg, I was finally able to grasp the magnitude of their multigenerational migration.

By watching evicted caterpillars crawling on milkweed beheaded from a recent mowing, I was able to feel the lesson of responsibility.

By crossing a continent alongside the monarch butterfly, my migrant teachers taught me how to see. 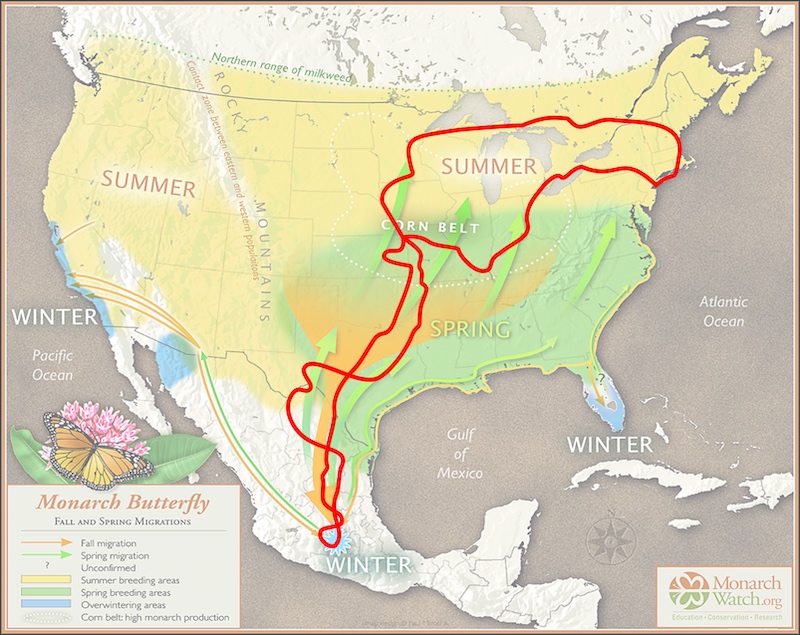 While looking for monarch eggs and caterpillars, along the way I was introduced to many shyer creatures. The googly-eyed spider peeking out from a curtain of milkweed. The angelic moth, sateen white, floating from purple bloom to purple bloom. The fiery-legged insect, fresh from its recent molt, gaining bearings in the stubble of the milkweed’s white hairs.

Following the monarchs thousands of miles by bicycle, I discovered an entire world. Here are six memorable encounters: 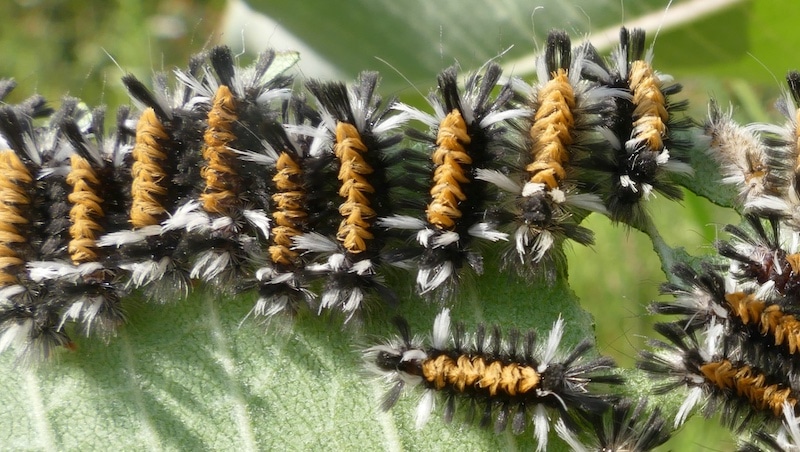 Wading through a strip of prairie alongside a bike path in New York, I spotted a mob of tussock moth caterpillars gorging on milkweed. Like monarchs, tussock moths can store milkweed’s toxins and use them for their own defense. Unlike monarchs that advertise their toxicity with flashy warning (aposematic) coloration, the tussock moth adults are drab, nocturnal creatures. Instead of bright colors, they evolved an organ that clicks, to be detectable by bats. Aposematic sound. The bats learn that these clicks are best avoided.

I didn’t know any of that as I watched those tussock moth caterpillars, each one a mess of black hairs, orange lashes, and white whiskers. Unlike monarchs that distribute themselves among many plants, tussock moths stick together for much of their lives. Together they formed a shag carpet. 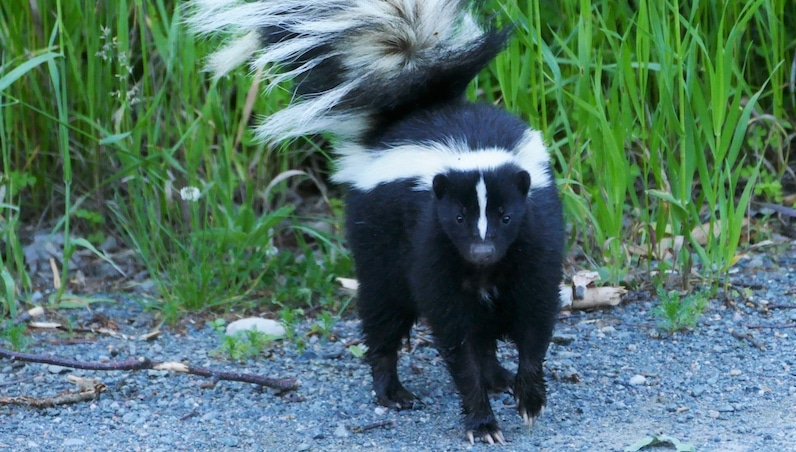 Zipping through a patchwork of rural Canada, I encountered the most dangerous animal of my trip. At first sight, I slammed on my brakes, and we locked eyes. There, teetering at the edge of the road, lurked a skunk. With only the width of the road separating us, the skunk paused. Her curious nose and eyes read the wind in a way I would never be able to do. The white stripes on black fur matched the pavement markings.

The worst-case scenario flashed in my mind. Getting sprayed would have been bad. With no shower in sight, and no change of clothes, I would have smelled like a skunk for the rest of my trip. Someone once told me that bathing in tomato juice was the antidote to skunk spray. I only had ketchup. Would ketchup work? I imagined rolling up to my next school presentation on my junky bike covered in ketchup, smelling like a skunk.

“Worth the risk,” I whispered as the skunk’s beady eyes looked at me and decided I was no threat. She cut through the grass along the shoulder, leaving me disappointed. Lathering myself in ketchup would have made for a good story. 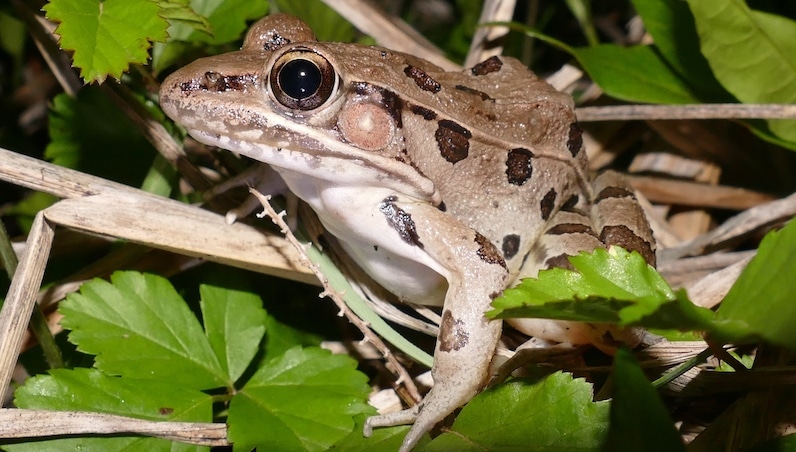 At the edge of a pond, I found my camping spot in a half-finished housing development in Texas. Here, as the light of our sun gave way, frogs began to sing. Cricket frogs clicked at the edge of water and mud, while the larger leopard frogs squeaked before launching themselves into the safety of turbid water.

I saw the approaching army of bulldozers looming nearby and lights of new homes polluting the once raw darkness. The male frogs called, attracting mates to lay eggs, to begin another generation. The very act of those frogs calling was an act of defiance. As development continued to squeeze life out of Texas, the frogs still called, to remind anyone listening that it was their home too. I listened. And with a heavy heart, I wondered how anyone could call such destruction progress. 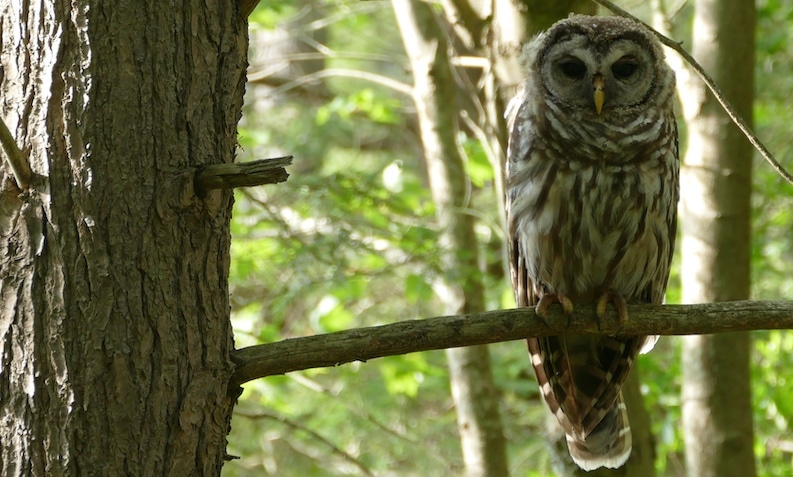 As I doggy-paddled through a roadside lake in Rhode Island, I caught a glimpse of an alert barred owl. I slipped from the water, onto a sun-warmed boulder, to watch the bird as it watched me. The wind mixed his tan and cream breast feathers, and stirred the brown circles around his darting eyes. Connected by curiosity, we watched each other, and after a few moments he closed his eyes as if to declare me harmless.

When darkness arrived, I retreated to my tent. I was expecting to hear the “hoooo cooks for youuuu” call of adult barred owls. Instead, as canopy leaves shuffled in the wind, a shrieking “caaaa” cut like lighting through the dark. One call was answered by another. Echoes. The owl I had seen was likely a juvenile. I found it reassuring to know that owls must learn to be owls. They too must learn to sing their song, hunt their food, and navigate their world. We were both teachers, the forest our classroom. 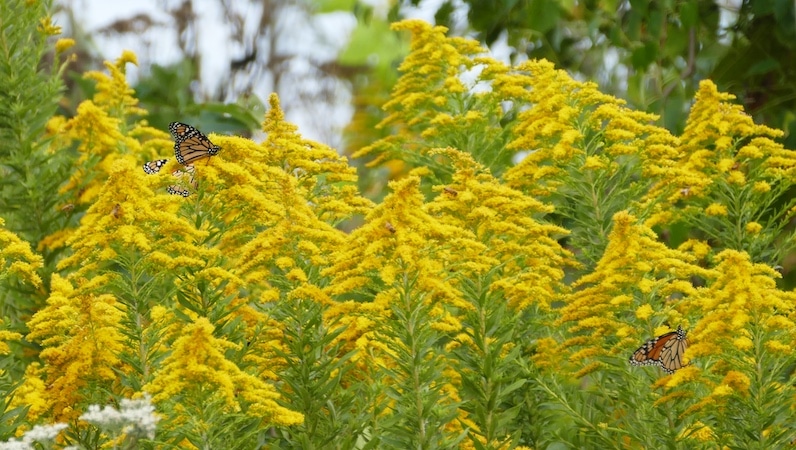 Searching for monarchs I was rewarded with blooming rainbows: pink Joe-Pye weed, violet wine cups, purple lupines, orange butterfly weed, blue larkspur. But my favorite was the goldenrod. As autumn led me south, the best miles were fenced by thick stands of goldenrod. I watched the plumes of their yellow tentacles rise like waves, spill into the wind, and feed clusters of monarchs with their blooms. Like a good friend, I was always happy to see the goldenrod waving back. The pollinators must have been happy to see them too. I never met a lonely goldenrod. 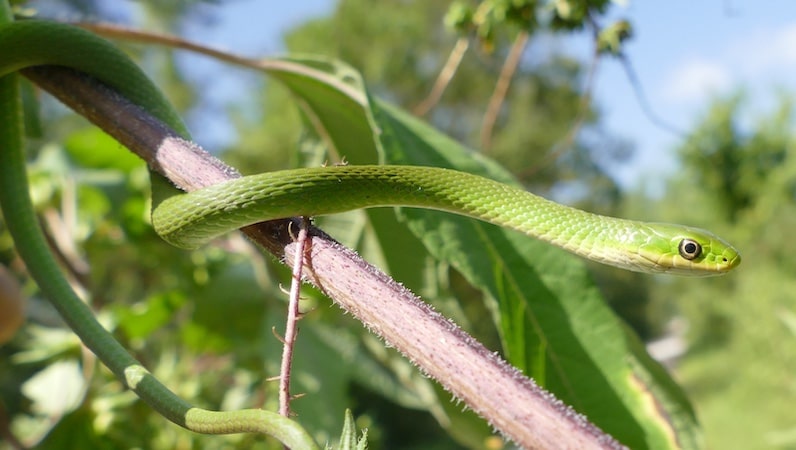 A rough green snake stretched across the Katy Trail in Missouri, basking in the sun. I was off my bike and the snake was in my hand before my bike’s wheels could stop spinning. I still feel the quilt of her keeled scales twisting through my fingers. I still see her eyes, huge and alive, watching me. A tube of muscle, a balance of power and grace. I can still see the peaceful beast melting into the leaves when I let her go. 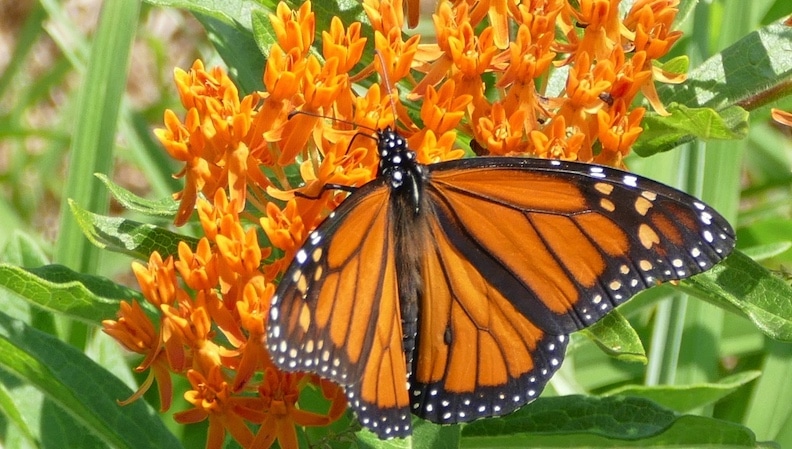 Of course, across the continent I found monarchs. The heroes of this story. The ambassadors of nature. They invite all of us to dive into their world and discover the brilliance of our own backyards. It is their undeniable beauty that lures us into their world. And there we linger. We see the spiders, snakes, and skunks that all benefit when the prairie is protected. These monarchs, the gateway bugs, hold our hands as we enter new worlds.