How might we unlock hope in an expansive spirit of democracy for present and future generations in this time of upheaval? This new conversation series on “The State of American Democracy” invites us to explore this question with some of our most creative thinkers and public intellectuals. The first episode on September 17, 2020, focuses on the moral foundations of democracy we can draw for guidance. The article below on the Haudenosaunee Confederacy highlights the early roots of democracy in the United States. – Mary Evelyn Tucker

“It would have been much to the purpose, to have inserted a more accurate investigation of the form of government of the ancient Germans and modern Indians; in both, the existence of the three divisions of power is marked with a precision that excludes all controversy. The democratic branch, especially, is so determined, that the real sovereignty resided in the body of the people . . . exercised in the assembly of kings, nobles, and commons together.” – John Adams

“It would be a very strange thing if Six Nations of ignorant savages should be capable of forming a Scheme for such an Union, and be able to execute it in such a Manner, as that it has subsisted Ages, and appears indissoluble, and yet that a like Union should be impracticable for ten or a dozen English colonies . . .” – Benjamin Franklin

MANY THOUSANDS OF YEARS AGO, the Peacemaker arrived at Onondaga Lake to deliver instructions that would unify five warring nations together under the Great Law of Peace, thus establishing the Haudenosaunee (Iroquois) Confederacy. At this time the Hiawatha Wampum Belt was woven to reflect this union, with the central tree to represent the Onondaga Nation. This peace endured for thousands of years, and the image of this belt is used today in the Haudenosaunee flag. The Founding Fathers of the United States took inspiration in this history and created a new form of democracy—one rooted under the Haudenosaunee’s Great Tree of Peace.

Skä·noñh (“peace and wellness”) is a Haudenosaunee greeting and, as Tadodaho Sid Hill reiterates time and again, can only be obtained when human beings are in proper relationship with the natural world. Skä·noñh evokes the Peacemaker’s original instructions, not only as to how this proper relationship is established, but also how it is to be maintained. It is a message of hope, because it offers a way out of chaos and grief.

Relationship with the natural world—reengagement with the life force of this planet—occurs, to the Haudenosaunee, through the women who are life-givers. This matrilineal clan system is the oldest participatory form of democracy recognized in the world today. The Haudenosaunee Confederacy Grand Council still meets, as it did thousands of years ago, at its capital and place of origin—the Onondaga Nation longhouse. Onondaga remains the heart and Central Fire of what is now six confederated nations: Mohawk, Oneida, Onondaga, Cayuga, Tuscarora, and Seneca.

There’s no doubt that the Founding Fathers were influenced by these ancient protocols, but they failed to incorporate what was most foundational to the peacemaking process: the role of women, the condolence of grief, and the protocols that continually reveal ever-changing new ways of living in proper relationship to the natural world.

To fully understand how the Founding Fathers received the story of the Great Law of Peace, we have to meet the figures central to that historical moment: the Peacemaker, Jikonseseh, Hiawatha, and the Tadodaho.

Jikonseseh, Mother of Clans: The Rule of Compassion

In the midst of war, the Peacemaker arrived and encountered a woman named Jikonseseh. She exhibited great compassion for the warriors, regardless of which side they fought for, by welcoming and feeding all who were hungry. Because of her generous heart, the Peacemaker guided Jikonseseh on to a different path that would more effectively begin the process of healing. She was given instructions to guide forty-nine women of the village to reacquaint themselves with their lost relatives of the sky, earth, and water. This would begin what would become the foundational matrilineal clanship of the Haudenosaunee. These forty-nine Clan Mothers were given titles, assigned for life. Among their many responsibilities was choosing a male counterpart who would represent their clan. These forty-nine clan Hoyane still convene in Grand Council at Onondaga today.

The Haudenosaunee Confederacy is not structured on a hierarchy of chiefs, but rather on Hoyane, loosely translated “Men of the Good Mind.” Each Hoyane counsels with his Clan Mother, and, should his responsibilities be neglected, is subject to “dehorning,” or the removal of his title by the Clan Mother. Clan Mothers determine when ceremonies are held. They also determine if and when their Nations enter battle, which is rare. Clan Mothers are also responsible for naming each child within her clan. The name she assigns is unique to the clan and to the child. It becomes the child’s clan identity to the natural world until death, whereupon the name returns to the Clan Mother for redistribution to the next child born. Clan Mothers are the foundations of the Confederacy, and maintain their clan’s identity by assuring that each person remains connected to their relatives in the natural world.

Hiawatha, the Great Orator: The Condolence of Grief

The Peacemaker also encountered on his travels the great orator, Hiawatha, who had been consumed with debilitating grief due to the recent murders of his daughters. The Peacemaker realized that without condoling this grief, Hiawatha would be unable to receive his instructions. The Peacemaker used wampum shells to help restore his stricken body.

Shells recall the primordial sea—the waters that connect us in life—the great expanse that Skywoman saw as she fell from her celestial home. Had birds not intercepted her fall, cradled her with their wings and gently set her upon Turtle’s back, she would have surely drowned. It was the sea animals that dove deep to locate the fistful of soil from beneath the all-encompassing waters that would sustain her life on Turtle’s back. Skywoman’s feet immediately began to massage the soil, as she took tiny steps that began to move counterclockwise, which turned into a dance of gratitude for all the special beings that created Turtle Island. As she danced, the soil grew. Today, Skywoman’s first dance of gratitude is re-created by the women during longhouse ceremonies.

With woven strings of wampum, the Peacemaker began the condolence of wiping away the tears of grief from Hiawatha’s eyes to restore his vision. The dust was brushed from his ears so he could hear the message, and the lump from his throat was cleared so he could speak clearly. Today, wampum is used to condole each newly raised Confederacy Hoyane. Special wampum strings identify each title. All treaty belts are woven with wampum beads that, for the Haudenosaunee, hold this primordial memory of gratitude and peace, while acknowledging that if not maintained, can lead back to chaos and grief. 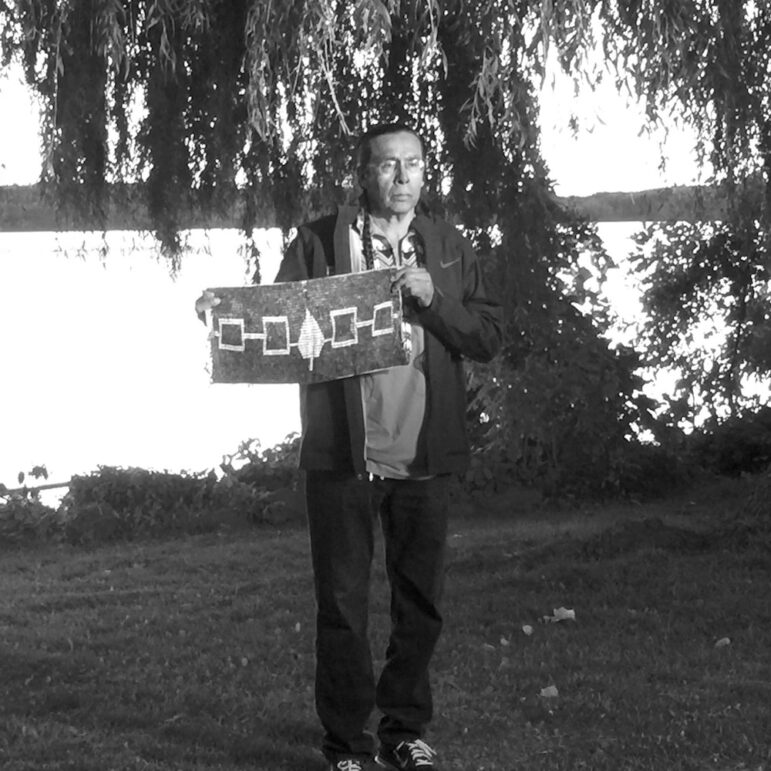 In the Photo: Tadodaho Sidney Hill, condoled spiritual leader of the Haudenosaunee, holding the Hiawatha Wampum Belt that depicts the “Great Law of Peace” which brought five warring nations together in peace over 1,000 years ago at Onondaga Lake. The Great Law of Peace influenced the Founding Fathers to develop Western democracy in the eighteenth century and the “Founding Mothers” of the women’s movement in the nineteenth century. This is the first public displaying of this wampum belt—which is over 1,000 years old—at Onondaga Lake in 2016.

Tadodaho, the Sorcerer: The Great Transformation

The Peacemaker had heard about this most powerfully wicked sorcerer, the Onondaga, Tadodaho. The Peacemaker understood that change required the Tadodaho to listen and accept his instructions. It was agreed that all five Nations would first unite under the Great Law of Peace, if they were ever to successfully “comb the snakes” from Tadodaho’s head. Hiawatha set out to condole each of the remaining forty-eight Hoyane. After bringing their minds together as one, they then approached Tadodaho, and they finally succeeded. This transformation turned out to be the most radical: the Peacemaker made Tadodaho the spiritual figurehead of the Confederacy. His title represents no clan, and is the only title chosen by the men, which completes the fifty Hoyane that comprise the Haudenosaunee Confederacy.

The Weaponization of History

The Founding Fathers were astute enough to recognize the virtues of the Haudenosaunee government. They could obtain a powerful edge by appropriating the tenets of strength through unity. They acknowledged that real sovereignty resided with people and government together—the image of bound arrows still seen in the presidential seal is taken directly from the story of the Peacemaker. And today, as then, Tadodaho remains neutral during deliberations across the two houses of Older Brothers (Mohawk and Seneca) and Younger Brothers (Oneida, Cayuga, and Tuscarora). This distribution of power served as a model for modern America’s three separate branches of government.

But the Founding Fathers had no intention of honoring the spirit of the Great Peace in its entirety; their objective, it soon became clear, was to occupy, colonize, and exploit this land. European laws, at this time, had already adapted fifteenth-century papal bulls called the Doctrines of Christian Discovery, into law. These were decrees calling “for Catholic sovereigns to seize lands of heathens . . . capture, vanquish, and subdue all [Non-Christians], put them into perpetual slavery, and take all their possessions and property.” This was coupled with the most prominently read Roman philosopher of the time, Machiavelli, who provided the “how-to” text on obtaining power through the art of political deceit.

The conquest of the “Americas” required the silencing of certain voices—as similar efforts had already shown across the sea. Its success would be contingent on the exclusion of women, the enslavement of people of color, and the unabashed exploitation of Mother Earth. Haudenosaunee women in particular needed to be silenced, so the church targeted our matrilineal Clan families and restructured them into patrilineal families. Clan names that identified with the natural world were soon replaced with names derived from imagined saints. The clergy issued last names to the fathers, to reorganize the family into a patriarchal unit to be entered into the church registry. By diminishing the role of women, colonists attempted to destroy our Clan system—our connection to Hoyane, our Clan Mothers, our ceremonies of gratitude, and the very name that tied us to our earthly relatives.

Next, we were run out of our territories by George Washington’s Sullivan-Clinton scorched-earth campaign of 1779, which was targeted at Onondaga. The following year we returned to find that Washington had paid his soldiers with tracts of our land, creating a military presence in what came to be known as the Empire State.

As we are now confronted with environmental devastation, global pandemics, an economic system that fosters chaos in the world, and an inability to think clearly or collectively toward a viable way to the future, perhaps it is time to pick up where the Founding Fathers left off and continue to learn from the Haudenosaunee. What better time than now to consider the ancient wisdom of our ancestors who, for thousands of years, sustained a more equitable way of living in proper relationship with the natural world? Who better to model a world where women reside at the center of deliberations and nature exists as our relative—not just a resource?