One of my first assignments as a young reporter at the El Paso Times was to follow a couple of scorpion experts into the desert after dark. They strapped snake chaps onto my legs and led me to an empty clearing. One of them lugged a giant metal lamp, which he set down on a small rise. “Ready for some magic?” he called out.

He flicked on the lamp. Beams of ultraviolet light washed across the sand. All of a sudden, I saw dozens of tiny, glow-in-the-dark toys that began to move. It took me a few seconds to figure it out: these were the scorpions we’d come to see.

The scorpiologists immediately began plucking up specimens with slender silver tongs and placing them in small, clear canisters. I remember this detail, in particular, because I would later share the back seat of their research vehicle with approximately a hundred such specimens, all of them thrashing against their plastic prisons.

What I remember most vividly from that night was asking a simple question: “What’s with the glow?”

The scientists began to detail the mechanisms of this fluorescence, how the animal’s cuticle, or exoskeleton, absorbs longer wavelengths of ultraviolet light. But I wanted to know why scorpions glow, what evolutionary advantage this garish trait bestowed.

The scientists glanced at one another. “Nobody really knows,” one admitted.

I found this astonishing. Scorpions had been roaming Earth for more than 400 million years. Surely, the scientific community had figured out why these nocturnal animals exhibited such a striking trait.

Three decades later, when I sat down to write my new novel, All the Secrets of the World, I found the mystery had lingered. In fact, it would end up as the engine of my plot. I cannot explain how this happened. It certainly wasn’t my conscious intention.

Early in the book, my heroine, a Honduran American girl named Lorena Saenz, is paired with a wealthy classmate named Jenny Stallworth for the eighth grade science fair. Jenny’s father, Marcus, is a research zoologist who is tasked with helping the girls.

As I pondered how he might do this, it suddenly came to me: Marcus was a scorpiologist! He would help the girls by taking them out into the desert and showing them how scorpions glow. The scene I’d experienced as a cub reporter suddenly leaped into the novel.

But unlike me, Lorena Saenz has a brilliant scientific mind. She’s voraciously curious and eager for the regard Marcus directs at her. Before long, the mystery of the scorpion’s glow consumes her.

The book is set in 1981, so there is no Internet to scour. Instead, she races to the library and reads everything she can find about scorpions. She eventually hypothesizes that the scorpion’s fluorescence “was a protective mechanism, a kind of alarm system. The glow researchers used to find them was, in fact, intended to help them hide.” Because the animal uses its exoskeleton to detect light, the moment it stops glowing, she believes, a scorpion knows it has found shelter from predators overhead.

Marcus is struck by the elegance of this theory. As they discuss potential experiments to test it, the two develop a powerful and increasingly illicit bond.

The more I learned about scorpions, the more central they became to my understanding of both characters, as well as the nature of their troubling relationship.

Like the animals that fascinate him, Marcus Stallworth is a predator who regards himself as prey, a creature whose shy manner conceals his aggressive impulses.

Lorena operates like a scorpion, in her own way. She is set aglow by the attention that Marcus lavishes upon her. Yet this illumination—the act of becoming visible—has terrible consequences for her and her undocumented relatives.

By the time I finished drafting the novel, I had come to see scorpions in a manner I never expected: as animals who offer a powerful reflection of the human arrangement.

At one point, Marcus notes that scorpions hunt by using the tiny hairs along their legs as sensory devices. “They can register the movement of a single grain of sand from ten yards away,” he tells Lorena. He’s describing his own predation, of course. But he’s also observing how exquisitely sensitive scorpions are. His description brought to mind what it’s like for me in the presence of my family, how excruciatingly sensitive we all are to the subtlest emotional disturbances in one another.

I’m not alone in my fascination with scorpions. A couple of years ago, just as I was finishing All the Secrets of the World, I attended a writing conference where I was stunned to hear the poet Eduardo Corral read a poem called “Guillotine.” It opens with these chilling lines:

After reading my novel, several writers insisted I read the poem “Iskandariya” by Brigit Pegeen Kelly, which reads, in part:

. . .God gave me a
scorpion, a venomous creature, to be sure, a bug with the bite of
Cleopatra’s asp, but not, as I soon found out, despite the dark
gossip, a lover of violence or a hater of men. In truth, it is shy, the
scorpion, a creature with eight eyes and almost no sight, who
shuns the daylight, and is driven mad by fire, who favors the lonely
spot, and feeds on nothing much, and only throws out its poison
barb when backed against a wall — a thing like me, but not the
thing I asked for, a thing, by accident or design, I am now attached
to.

Kelly’s words capture what I discovered in my amateur plunge into scorpiology: that the ancient creatures I once found scary and alien became, upon closer inspection, an unlikely muse that illuminated the story within me. 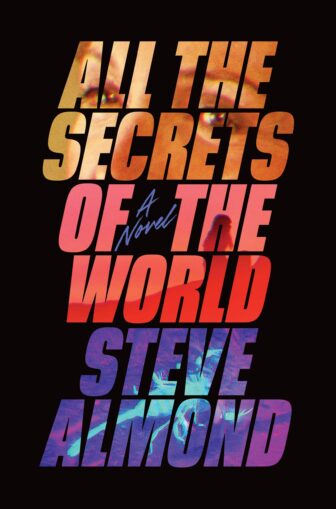 You can learn more about scorpions, animal fluorescence, and blood forensics in Steve’s new novel All the Secrets of the World, out this spring from Zando. Read an excerpt here.

Steve Almond is the author of twelve books of fiction and nonfiction, including the New York Times bestsellers Candyfreak and Against Football, and most recently the novel All the Secrets of the World. For four years, Steve hosted the New York Times Dear Sugars podcast with his pal Cheryl Strayed. His short stories have been anthologized widely, in the Best American Short Stories, Pushcart Prize, Best American Erotica, and Best American Mystery Stories series.