An excerpt from The World as We Knew It: Dispatches from a changing climate, edited by Amy Brady and Tajja Isen.

I grew up in Qatar, a tiny peninsula off the eastern coast of Saudi Arabia. Less than a century ago, before the boom, it was a desolate corner of the world, home to Bedouin tribes, shepherds, fishermen, and pearl divers. Today it is, by virtue of its massive oil and gas deposits, the richest country on Earth.

As in Alberta, Texas, and countless other little empires of extraction, money has lubricated a wild and rapid urban transformation in Qatar. The vacant lot where I snuck my first kiss is now a maze of sail-shaped skyscrapers. A playground where I learned to ride a bicycle has been cleared to make room for five-star hotels. The whole area—playground then and hotels now—stands on land originally reclaimed from the sea, in a neighborhood whose old Arabic name, roughly translated, means “the burial site.”

If the speed with which this transformation happened is unique, the trajectory is not. In the age of capitalism everything is a placeholder for its more lucrative replacement. And is there more universal an expression of nostalgia than to return to the site of your first kiss and find it unrecognizable? Time moves this way.

But there is now another kind of obliteration, another kind of burial. Within the next century, possibly within my lifetime, Qatar’s landscape will become uninhabitable. There exists a scientific definition, based on heat and humidity, of what constitutes a survivable climate. If carbon emissions continue at their current pace, it will eventually become impossible to live in much of the Middle East without constant air-conditioning. It will become impossible to exist, for more than a few minutes, outside. Sometime within the next century, stories of life in this place—the stories that constitute almost the entirety of my childhood—will sound, to new generations, like fiction. The tether between what is and what used to be, constantly stretching under the weight of history and progress, will not stretch any more. It will snap.

The axis along which almost all climate-change anxiety orients is, by necessity, pointed toward the future. It is a space that will never arrive, and because of this we are all prone to afford it endless possibility. Never mind that even if we were to impose a total prohibition on fossil fuels tomorrow the atmosphere would continue to warm for another century at least, never mind the glaciers already disappeared, the coral already dead, never mind all the damage we’ve done—the future is and always will be thought salvageable. We have framed climate change as a crisis of the future because its worst ramifications are still to come, and because the future is something we feel we can still control.

But we should also spend more time thinking about how climate change will upend our past.

In the age of capitalism everything is a placeholder for its more lucrative replacement.

This summer, by the banks of the Tigris River in Kurdistan, archaeologists found a palace, long ago drowned. It was built during the reign of the Mitanni Empire, a little-known civilization that once ruled much of northern Mesopotamia, about 1,500 years before Christ.

From a researcher’s perspective, the finding is a good thing, a key addition to the knowledge base, but how it came about is the result of something far less positive. A depletion.

About forty years ago, this part of northern Iraq was flooded after the construction of the nearby Mosul dam. But so severe is the current drought that the Tigris recently dropped away to reveal a new topography, and in that barren wash the archeologists found a structure hidden for millennia—a figment of memory violently resurfacing, the way old scars reappear on the skin of malnourished bodies.

We are about to lose so much. The next few decades will see the disappearance of countless glaciers, coral reefs, animal and plant species, miles and miles of coastland. The places in which our stories took shape will become entirely changed, and the changes will birth new stories, a new telling of forgotten pasts—ghost towns rising out from the bottom of vanishing lakes, secret histories written into the rings of severed trees. In this moment of monumental import, this apex of a turn beyond which lies our survival or eradication, climate change is going to render our past as unrecognizable as our future.

As I write this, the Brazilian government is passively aiding in the wholesale destruction of the world’s largest rainforest—the source of a fifth of this planet’s oxygen—in the name of commerce. The president of the United States and his corporate and political enablers are busy tearing up environmental regulations, knowing full well they will never have to answer to the future generations of children who’ll struggle to breathe every day as a result.

We can imagine—we should imagine—the repercussions of this wanton cruelty and greed, the ways in which they will reinforce all our existing inequities. The rich will move to the temperate, less-ruined places; the poor will be made refugees and the influx of refugees will prompt bloodshed at the borders of the privileged world. We will continue to kill one another over food and over land as both become scarcer.

But we will kill one another over memory, too. There’s a reason terrorist groups such as the Islamic State refuse to use the present-day names of the places in which they operate, adhering instead to anachronistic markers of long-gone empires. It is, in its own way, a kind of diseased relationship with memory, this notion that the only acceptable ordering of the Earth is some previous ordering of the Earth, some other set of lines drawn on a map. But it is nonetheless a powerful notion, and in the coming decades we will render millions and millions of people more susceptible to it. In the great undoing that is climate change, there is born an entirely new means by which one dispossessed generation can say to the next: your home used to be here and it was taken from you unjustly. It was the sea or the storm or the drought that buried it but it was something else that killed it—its killer was a system, an institutionalized greed, an infinitesimally small bump upward in the wealth of the already wealthy.

So many extremists will be made this way, and when those extremists inevitably unleash whatever evil they mistake for revenge, not one of us will be able to honestly say we didn’t see it coming.

It may be the case that we’re past the point of fixing this. Perhaps we might still be able to mitigate the worst effects of climate change, but maintaining our current ease of life into the next century and beyond is optimistic to the point of hallucination. To accept this outcome is difficult, because it entails accepting that the future is no longer a space of infinite possibility—rather a house mortgaged to the hilt, a foreclosure in waiting.

We must create new ways to think about what comes next, but also about what came before. As coastland drowns, as wildfires thin the ground and thicken the air, as changes that used to take centuries begin to take years, it will become increasingly difficult to anchor our memories to a geography, to a stable piece of land. So we must find other anchors—anchors that link memory to people, to relationships, to the solidarity and compassion and resistance that will serve as our only useful lifeboats in this storm.

Some of this work will fall, as it must, onto the shoulders of historians, researchers, people who make it their life’s mission to measure the depth of marshland and the health of honeybees. But more so, it should be the work of artists, of storytellers. Memory is a fiction after the fact, less an accounting of the moment than of our passage through the moment. We have an obligation to document and preserve this compendium of fiction, these stories we tell ourselves. And we have an obligation to do it now, meticulously, because the stories and the empathy they engender might save us still, might move people to act. And because in time the world in which those stories took place may well vanish, in its place a different, emptier world—emptier of nature, emptier of life; the stories, once lost, lost forever.

There will come a time when millions of people around the world—from the islands of Fiji to the coasts of Bangladesh to the southern tip of Florida—can no longer point to a brown spot on a map and say: I am from here. There will come a time when many sense triggers of memory—the smell of petrichor, the sound of a particular birdsong, the feel of snowflakes against the skin—will be more and more fleeting, and in turn the things they once triggered will burrow deeper and deeper into the back of the mind. It is already happening.

We must learn to become conservationists of memory. Otherwise, this damage we have done to our planet will cost us our past, as it may have already cost us our future. And without a past or a future, what are we? Nothing. A flickering violence of a species, here such a short time, insatiable, then gone. 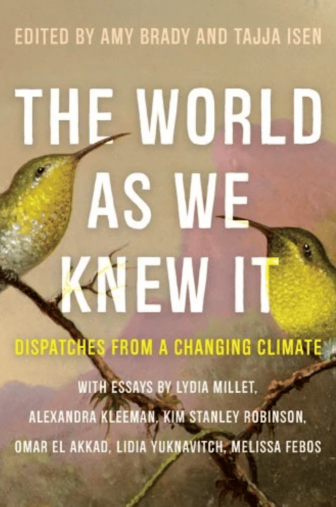 Excerpted from The World as We Knew It: Dispatches from a changing climate, edited by Amy Brady and Tajja Isen. Published with permission of Catapult. Copyright 2022. This piece originally appeared on Lit Hub.

Omar El Akkad is a journalist and author based in Portland, Oregon. His work has appeared in The Guardian, Le Monde, Orion, Guernica, and many other publications. He is the author of the award-winnng What Strange Paradise, and his debut novel, American War, is an international bestseller and has been translated into more than a dozen languages.