MARALAL IS A SLEEPY TOWN, several hours north of Nairobi in northern Kenya. It borders the Kirisia Forest, a vast, dense, and mountainous ecosystem that spans 780 square kilometers and generates water for more than 150,000 people living in the parched lowlands below. The forest is home to the Samburu people, a predominantly seminomadic group closely related to the Maasai in language and traditions.

As regional drought pushes communities toward a humanitarian crisis and climate change disrupts pastoralists’ traditional way of life, traditional gender roles are also shifting. The drought has driven Samburu men to leave for months in search of pasture, and in their absence, it is becoming more acceptable for Samburu women to work for money and participate in decision making. Many have teamed up with the Kirisia Community Forest Association (CFA), a collaborative initiative that focuses on addressing deforestation while protecting the livelihood of communities that depend on the forest. The project invites Samburu women to help preserve this critical ecosystem. Until recently, these women were cutting firewood to make charcoal, their only source of income. Now they are directly involved in protecting the trees they once felled, managing the forest, and using its resources sustainably.

Community-based projects like this have the potential to empower women and lift entire communities in sub-Saharan Africa out of poverty while also helping preserve some of the world’s most threatened ecosystems. “Before, we were destroying the forest because we didn’t know it belonged to us,” says Grace Kwamboka Leikoslish, a member of the CFA. “We didn’t know that by cutting down trees, the weather could change, or that wild animals could disappear, or that the water catchments would run dry. Now we know that we must protect it; it is our responsibility and our children’s. The forest gives us a livelihood.” 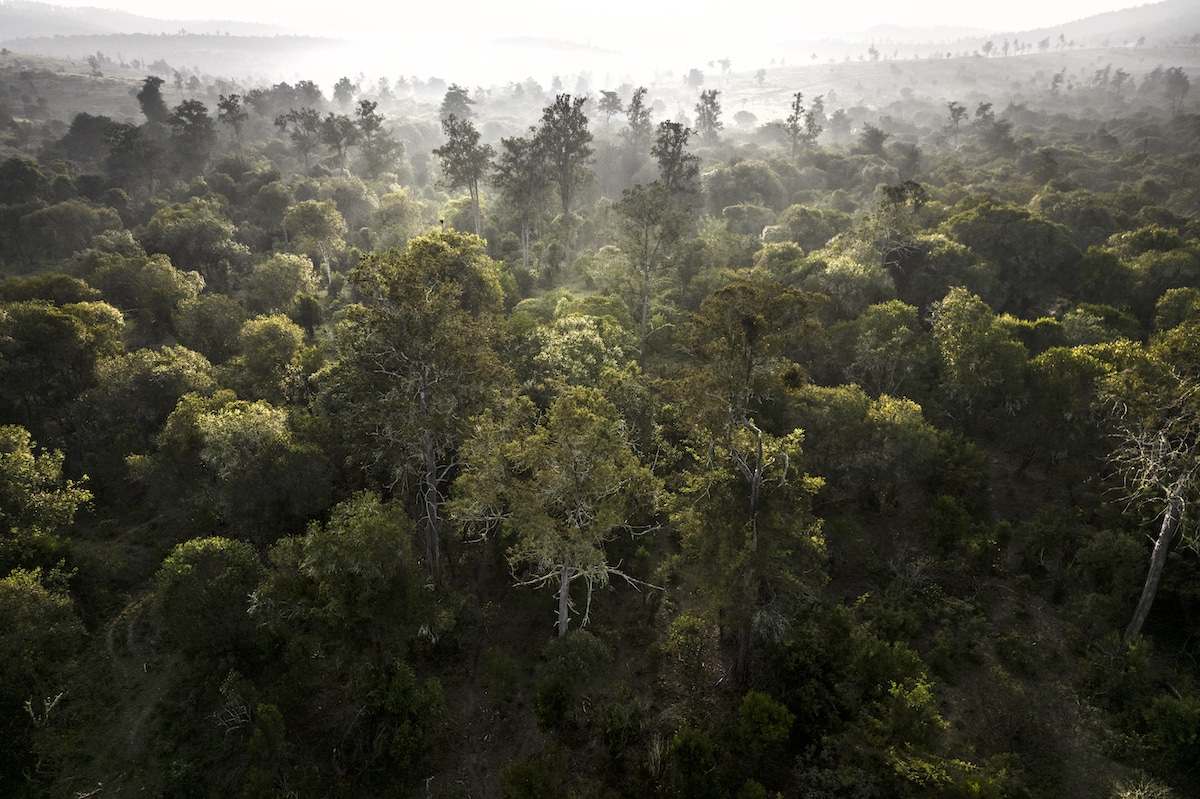 Cover Image: Members of the Community Forest Association (CFA) walk on the edge of the Kirisia forest in Samburu, Kenya. The scouts of Kirisia patrol the forest on a daily basis, interact with the community, and raise awareness on the importance of protecting the environment.

Above: Rays of morning sunlight shine through trees at the edge of the forest near the town of Maralal. Covering 226,000 acres and at an altitude of 2000 meters, the forest is a critical ecosystem for tens of thousands of people living in the drought-parched lowlands of the region. 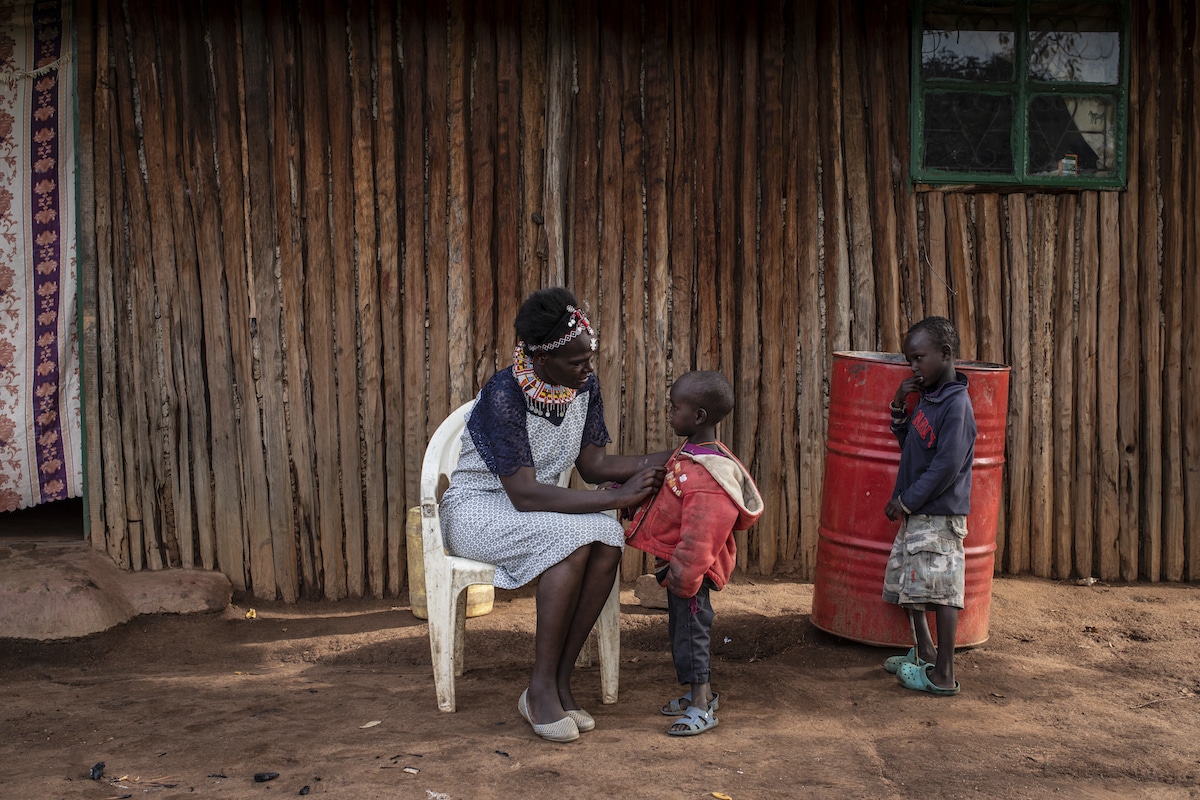 CFA member Grace Kwamboka Leikoslish, 34, converses with her young nephews by her home on the edge of the Kirisia forest. 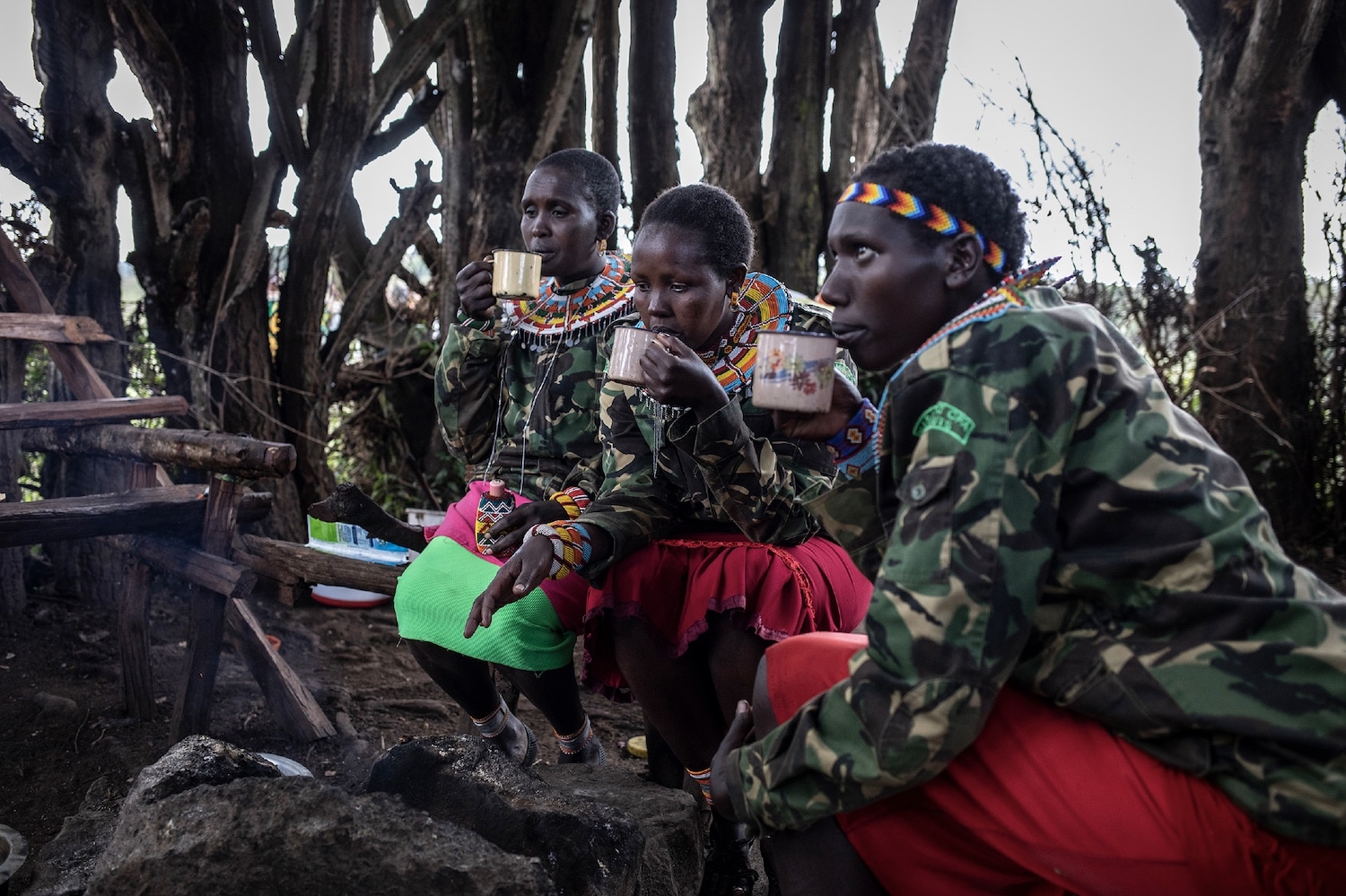 Elisa Lesilele, 24, has breakfast at base camp before departing for a morning patrol. She has been a scout volunteer of the Krisia CFA since 2019. “In our culture, women are usually not involved in decision making,” she explains as the sun rises above the mist-covered forest. “But now things are changing, and we are directly involved in protecting these trees.” 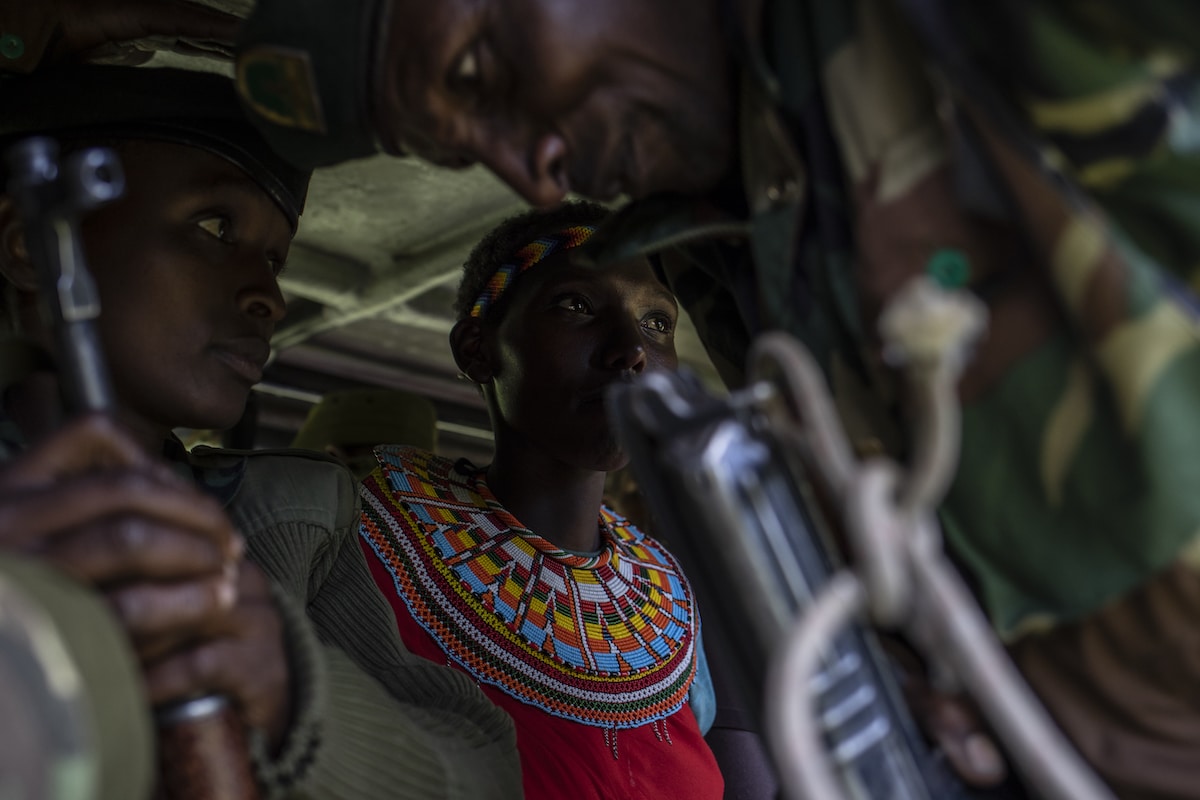 Elisa Lesilele (center), joins a team of Kenyan Forest Service rangers on a patrol. Stopping illegal charcoal burning in the forest is a challenge that Elisa believes is best met by raising environmental awareness within the community. “When we see someone cutting trees to burn for charcoal, we try to talk to them and explain the importance of protecting this forest.” 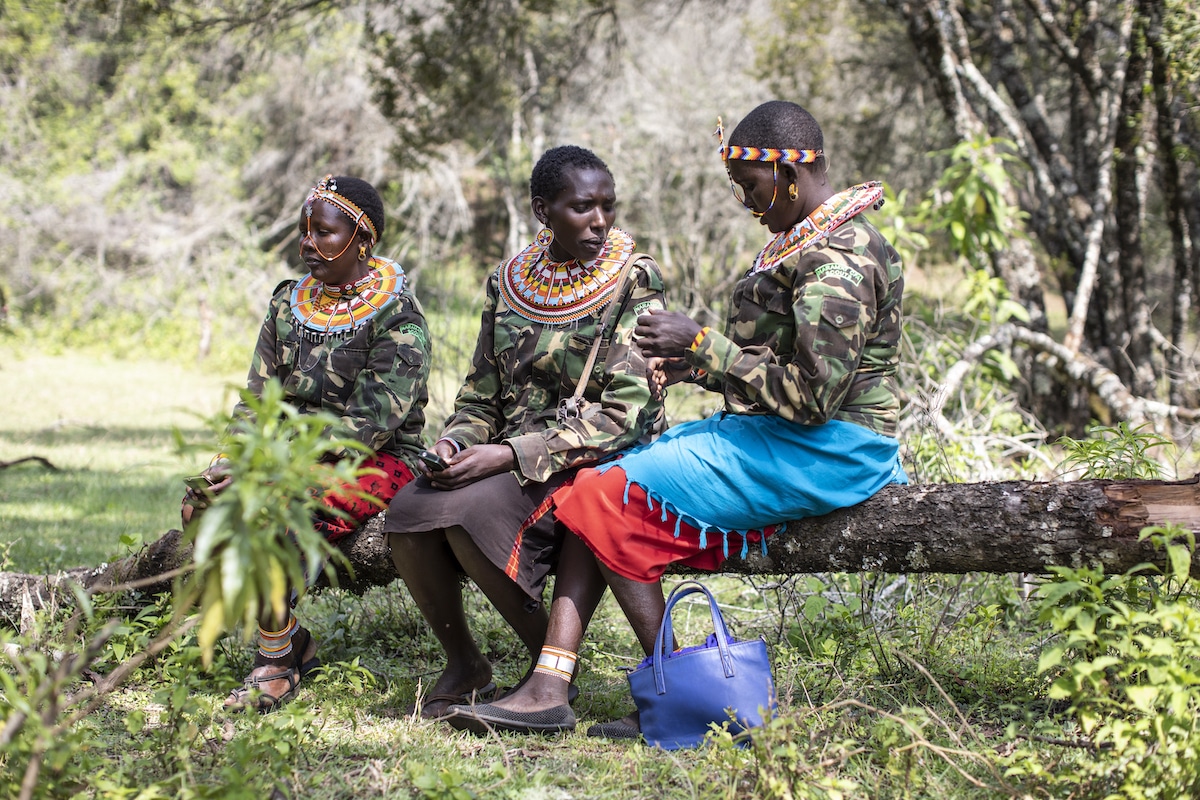 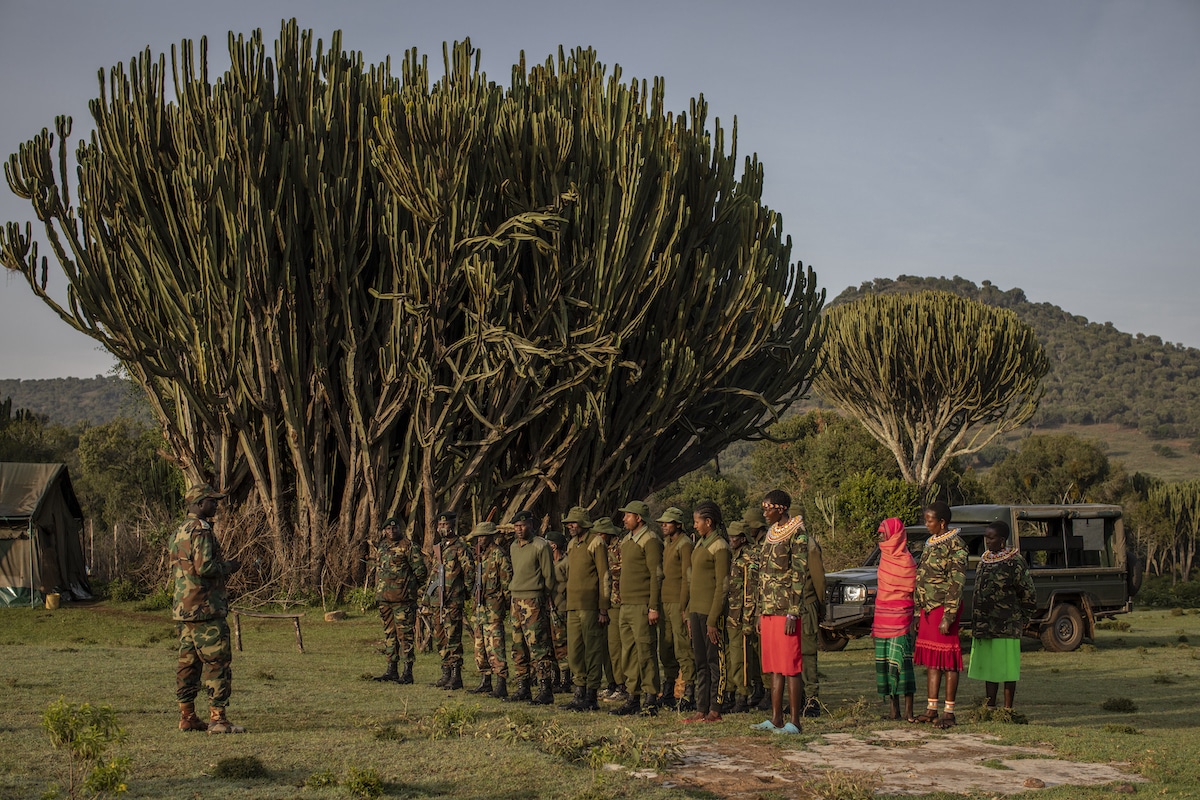 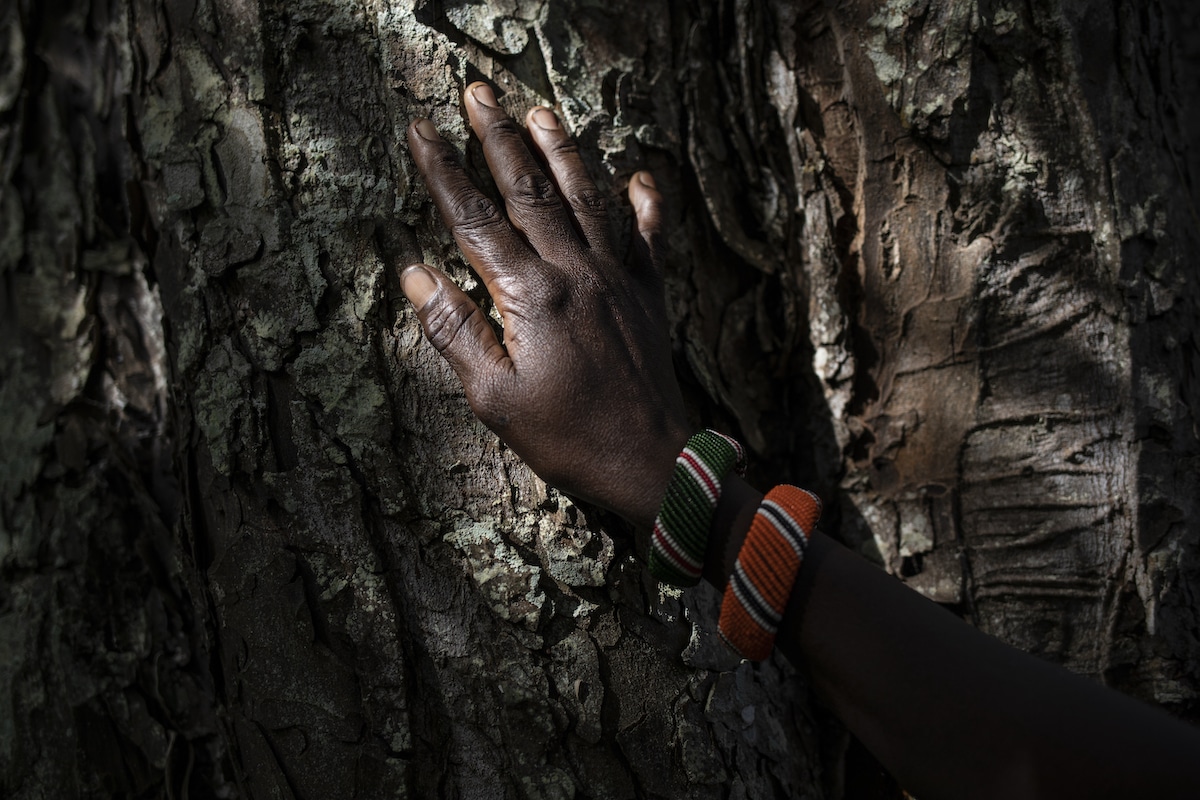 Naisulla Letiwa, 31, touches the trunk of an old red cedar. 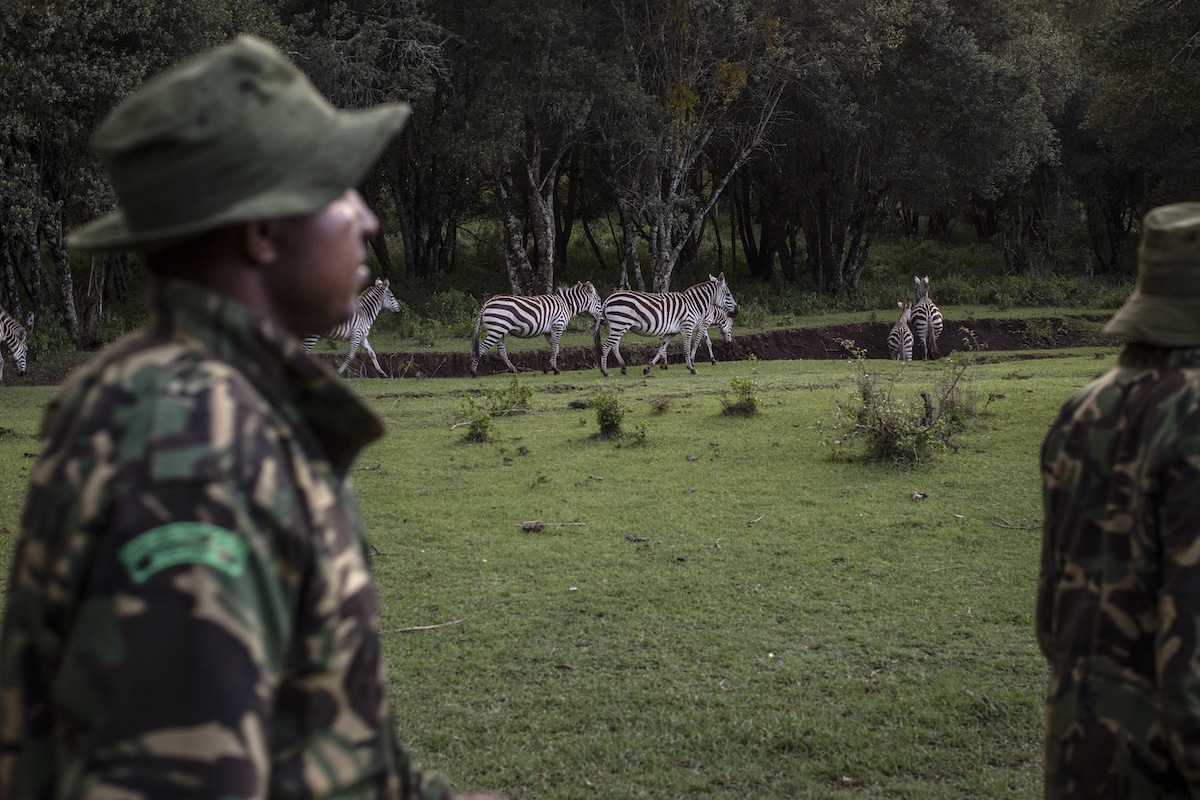 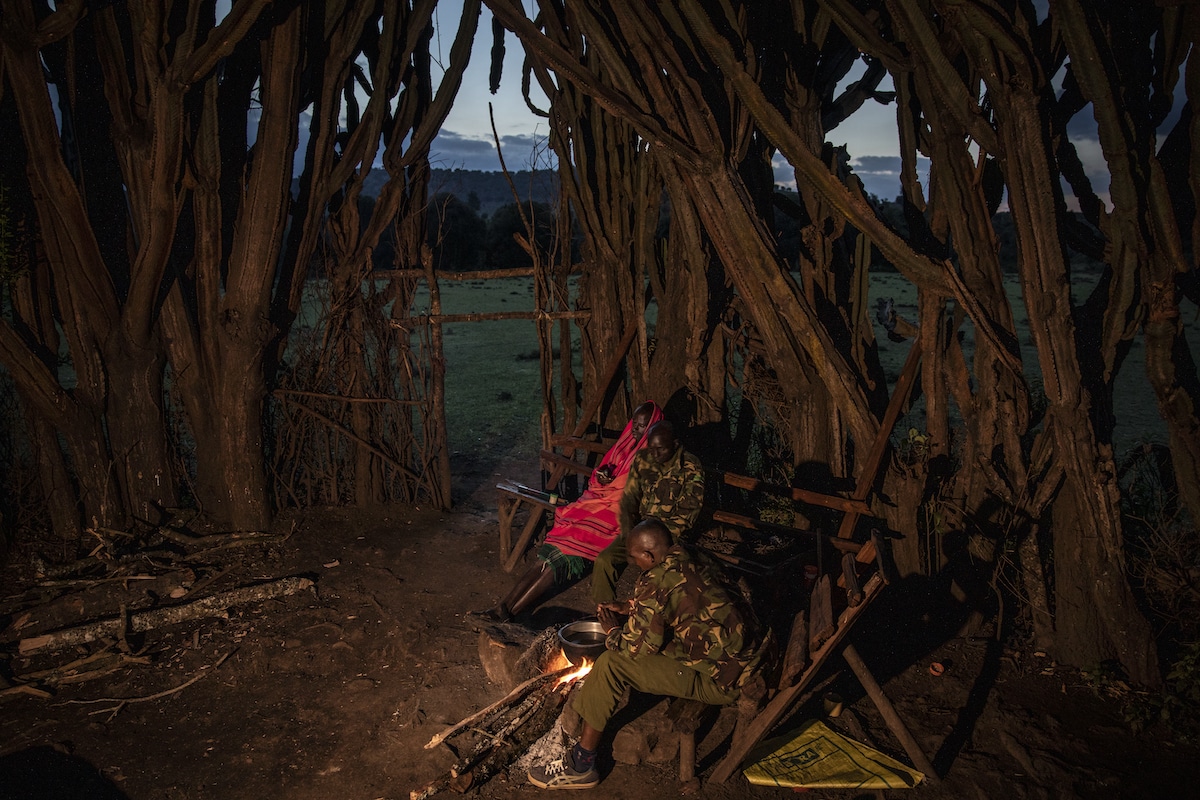 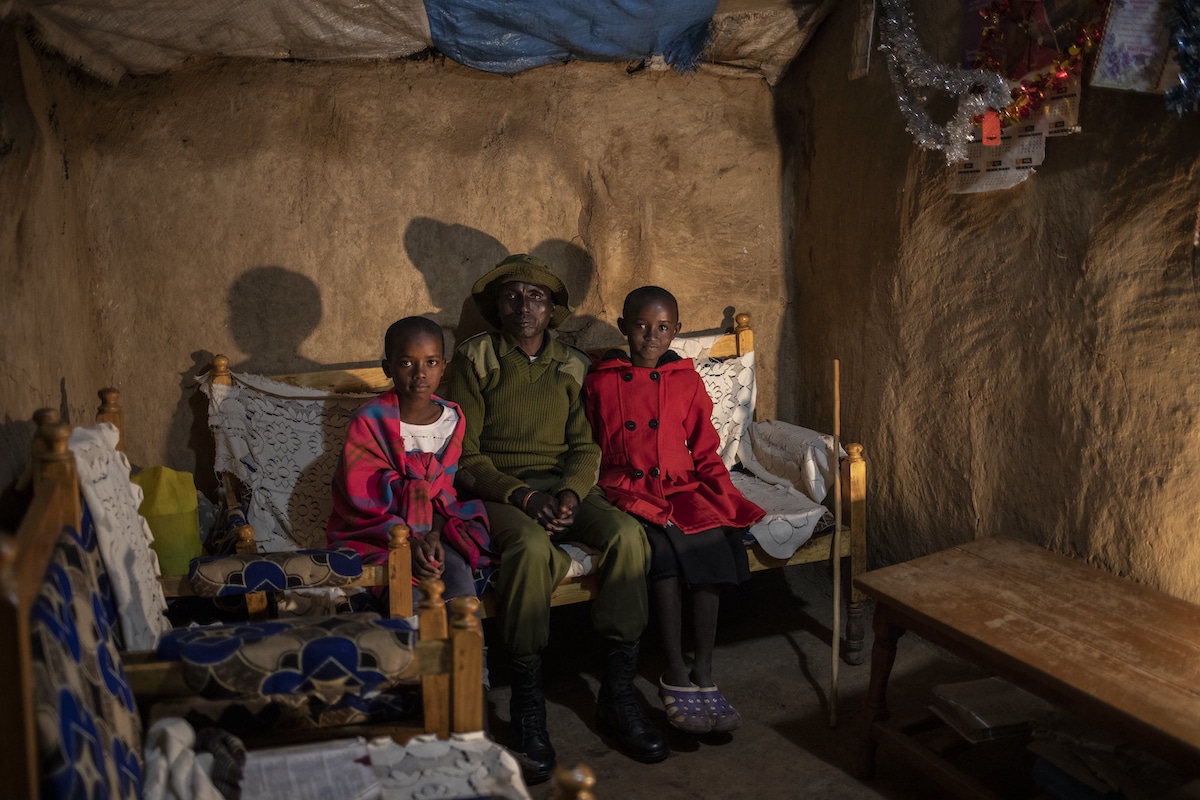 CFA scout Samuel Kugosher poses with his daughters Margaret, 8 (right) and Salinuoy, 9 (left) at their home on the edge of the forest. 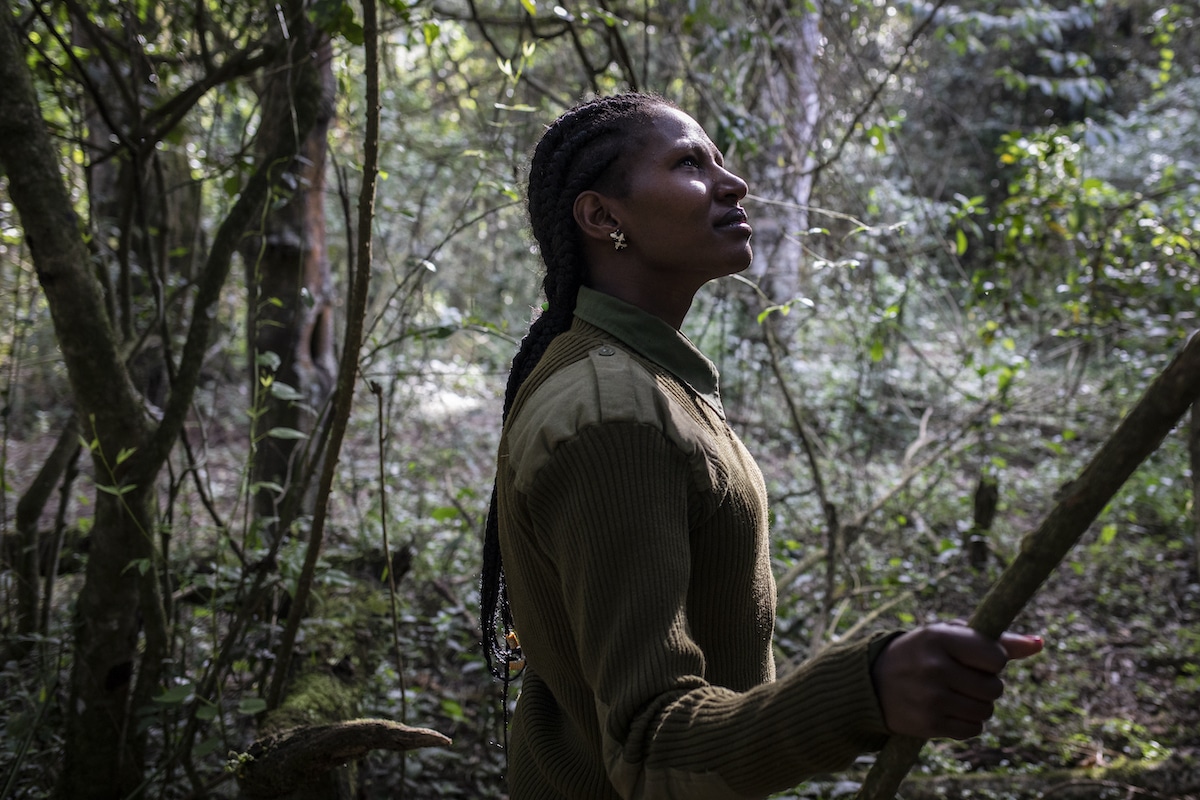 Zeinab Leboiyare, 24, walks inside the Kirisia forest during a group patrol. “I am proud to know that I can make a difference in protecting this forest,” explains Zeinab. “Before, we did not know the importance of taking care of these trees. But now, with climate change making droughts ever worst year by year, we are starting to understand that we have to take matters into our own hands if we want to protect our environment.” 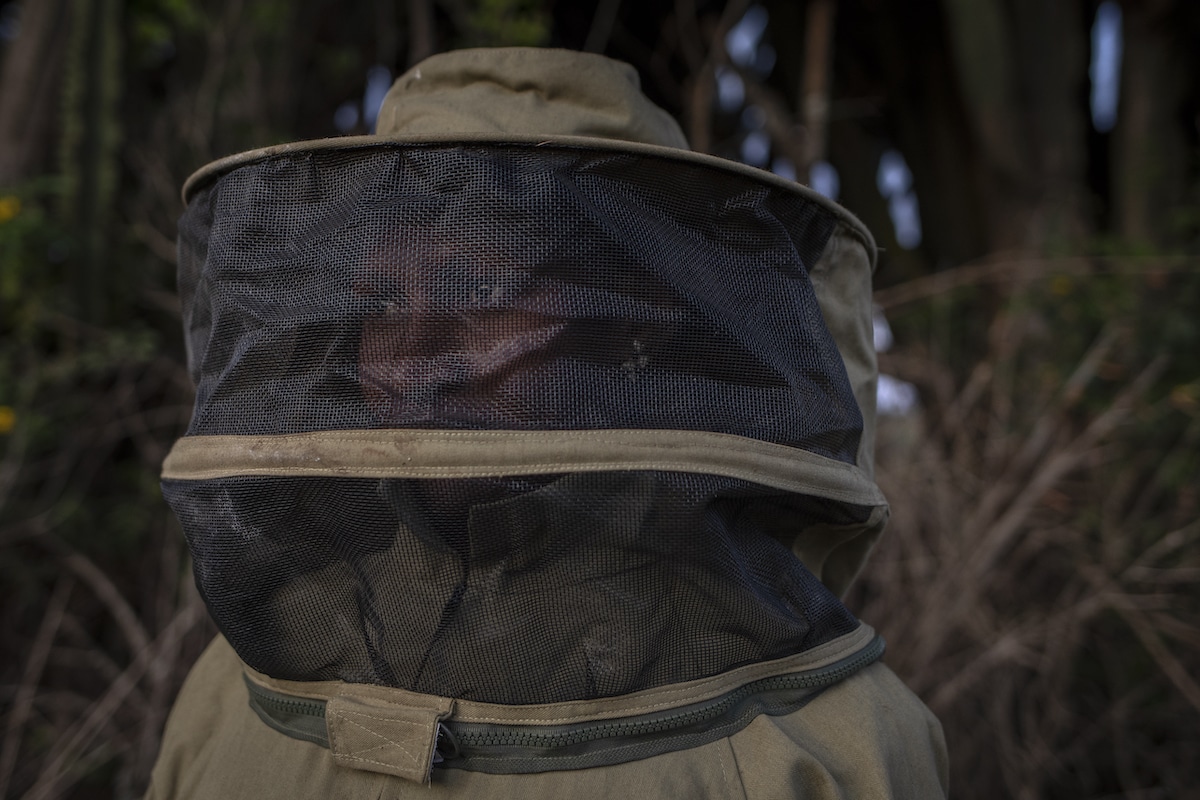 Zeinab Leboiyare prepares to harvest honey. As climate change disrupts pastoralists’ traditional way of life, such community-based projects have the potential to empower women and lift entire communities in Sub-Saharan Africa out of poverty. 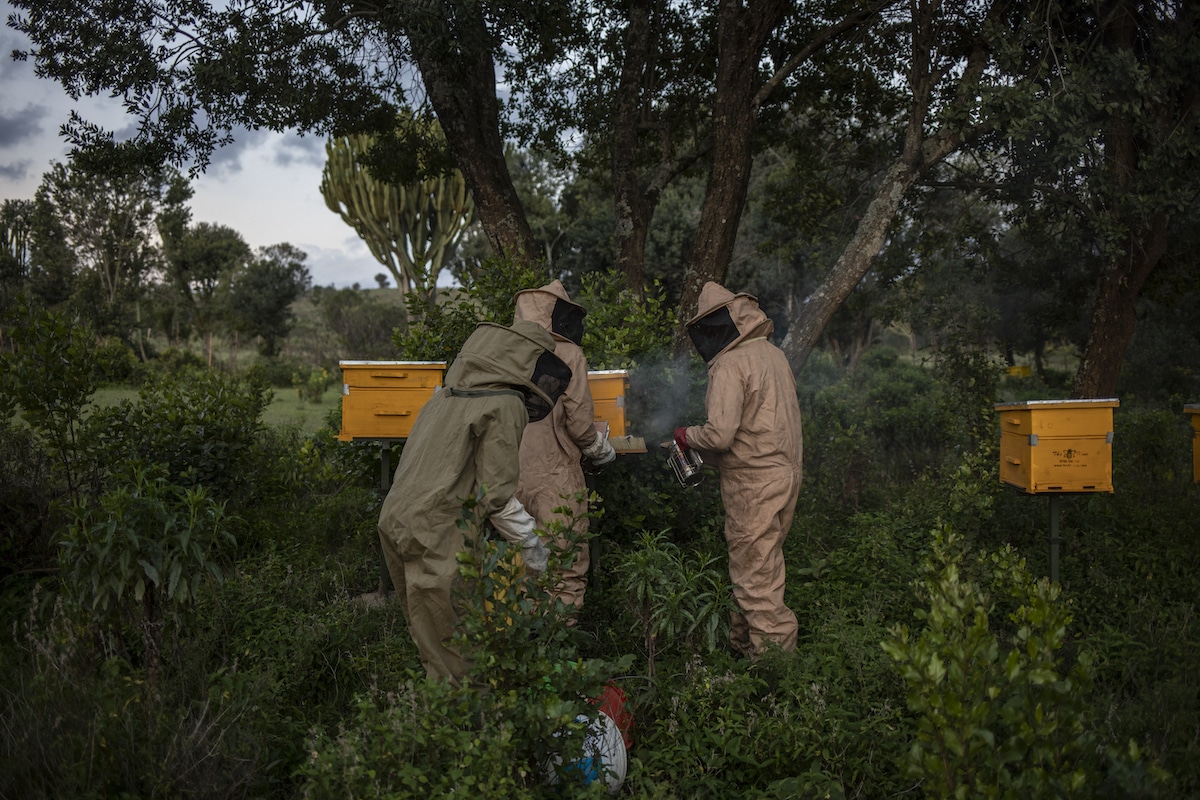 Beekeeping has become an important economic activity for many CFA members. 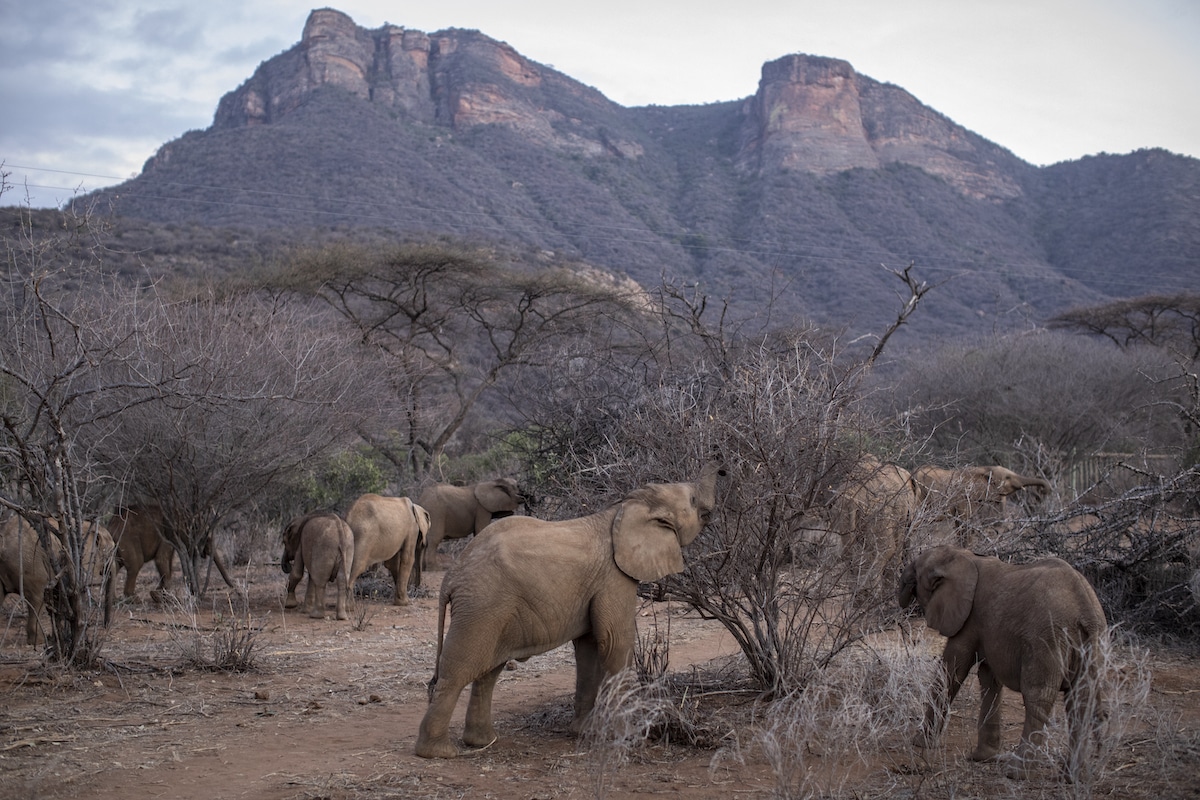 The community of Kirisia rescues and relocates young and distressed animals from the forest to the Reteti Elephant Sanctuary. 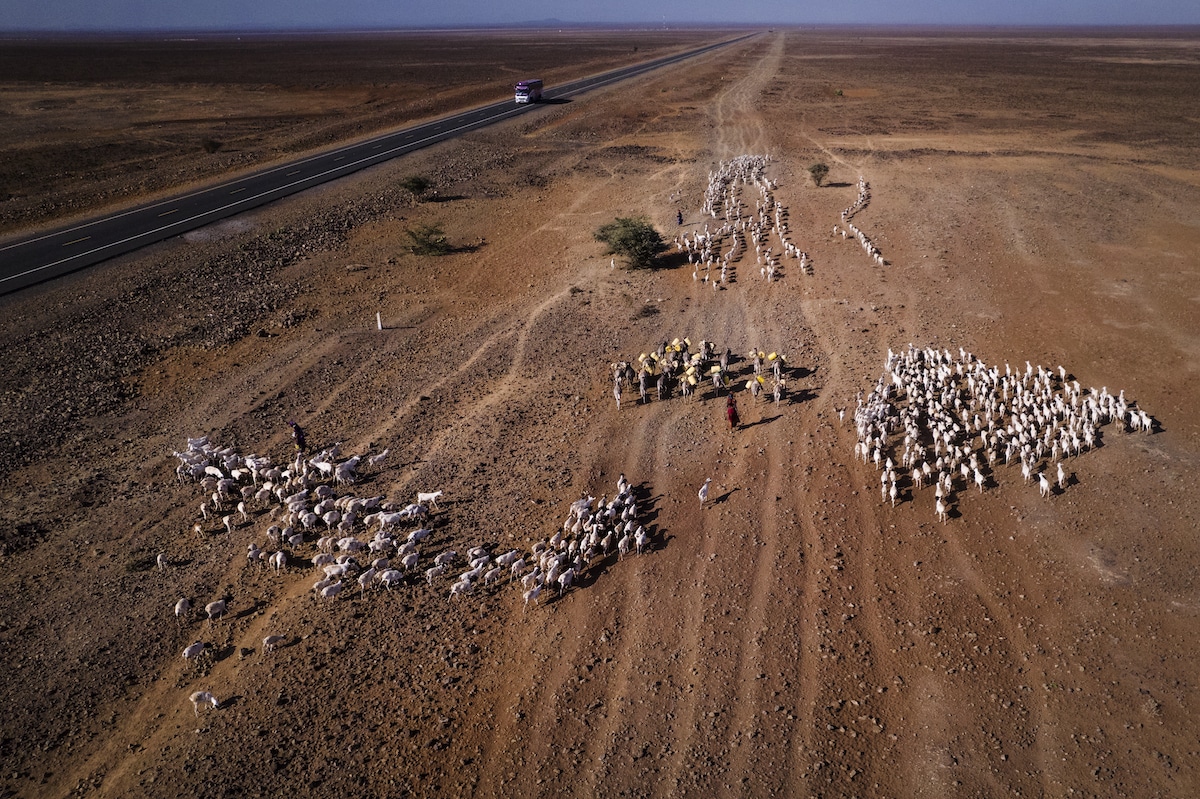 Women herd goats toward one of the few water points in the drought-stricken region.