Aminatta Forna, whose family is from Scotland and Sierra Leone, goes “hame” to the Shetland Islands to trace the path of her great-great-grandmother, excerpted from her new book of essays, The Window Seat.

IN THE SHETLANDS, tourists come for two reasons. There are the twitchers, for the islands are renowned for their birdlife—puffins in particular, and many other varieties of seabird: guillemots, kittiwakes, razorbills, and gannet, which nest in breeding grounds on the islands’ cliffs. The other kind of tourist, people like us, are here in search of the past.

Early one morning, I drew back the blackout curtain of the cabin I shared with my mother to a view of the cliffs at the southerly tip of the Shetland Mainland. Less than an hour after docking and driving the length of the island, a much smaller ferry carried us to Yell, an island made of peat, like a big peat patty, on which the most common activity (after fishing and fish farming) is, unsurprisingly, peat harvesting. At the other end of Yell we arrived to find the first ferry to Unst full and so we went to the ticket office to book ourselves onto the next available crossing. We had paid for a return ticket, but once aboard, the ferryman took our ticket but failed to return the stub. On the Shetlands you show your ticket on the way north but nobody bothers you for it on the way south: “For how else did you get there in the first place?” said the ferryman. 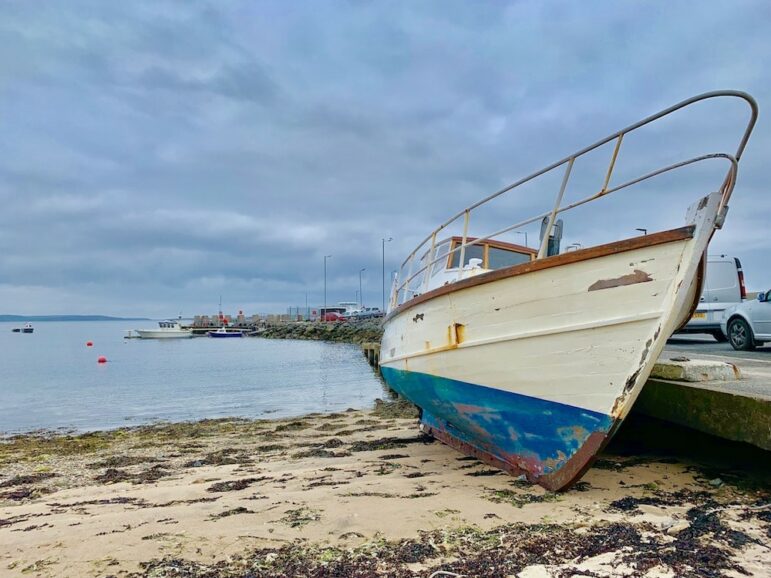 Haroldswick, so named for the Viking King Harald, of the famous Icelandic chronicle Haralds saga Sigurðarsonar, which tells of his exploits—romantic, military, and religious in Sicily, Palestine, Jerusalem, and Novograd. Haroldswick is reputed to be the first place in the British Isles the Vikings disembarked from their longships and where they came to settle. There’s a reconstruction of a longship on the road into the hamlet. Longships were capable of carrying one hundred people as well as their animals. For several centuries the Vikings occupied themselves with raids on settlements as far north as Iceland and Greenland, south to Andalusia and the North African coast, east to the Black and Caspian Seas, and, at least once, west to Newfoundland. They guided their longships by the sun and stars and followed the migratory flight path of birds.

Most everyone on Unst has Viking, or at least Norse, blood. According to DNA test results, I carry 2 percent Norwegian blood. This puts me in the company of the nearly 30 percent of Shetlanders who carry Norse DNA. My grandfather’s last name was Christison, the distinctly Scandinavian “son of Christian.”

“We’re descended from Vikings,” my mother had told the ferryman on the way over, to which he had replied, “Aren’t we all?”

Alongside my DNA results, the company I used provided migratory maps of my ancestors, which showed other elements of my Scots family arriving in the Shetlands from the Highlands sometime between 1775 and 1800, around the time of the Highland Clearances. Thousands of families were evicted from their homes by wealthy landowners who wished to use the land for raising sheep. Many went to Canada and Australia, but more on that later. At least one part of my grandfather’s family traveled in the opposite direction, shipping out to the islands, to the Orkneys and Shetlands.

The Arctic winds that blow across the Shetlands flatten everything in their path, leaving a landscape that is stark and treeless. We passed a single stand of trees, enclosed by stone walls, that had grown their crowns all bent in the same direction, like a crowd of old men holding up broken umbrellas. Though it was halfway through May, their branches were bare. The winter winds reach seventy miles an hour. Life survives by hugging the earth: tiny Shetland ponies and Highland cattle. The first time I visited the Shetlands was in 2010, when I had gone there with my husband. I had been giving a talk at the University of Aberdeen and decided to stay and visit with my mother, but she hadn’t arrived yet from New Zealand, and so we filled the time by traveling to the islands. We had met a chocolatier on Unst, who with his wife had decided the next turn in their lives with eyes closed. Thus they had stuck a pin in a map. The pin landed in Wales and so they went online and bought a house there, sight unseen, and which, through error, either in the description or misreading on their part, turned out to be in the Shetlands. Still, they pressed on, relocated, and began shipping raw chocolate to the islands where they opened a chocolaterie, Britain’s “most northerly” (which visitors soon discover is a description applied to almost every retail opportunity in Unst). The chocolatier had described for us the shock of the winters, the hours spent setting rat traps around the outside walls of their house to stop the animals from gnawing their way inside.

“They’re gone,” said the ferry pilot, when Gregor and I visited the pilothouse and I asked if the chocolate shop was still there. We told him we were here to see the croft our ancestors had once farmed on Unst, to which he had replied: “Which one?” We were caught out by the unexpectedness of the question, also we hadn’t been paying proper attention to our mother’s charts and maps the evening before, thus we failed in our reply. Instead we learned that Shetlanders, those who stay, know where they came from with pinpoint precision. Feall is marked on maps of Unst and signposted on the road and it took us no time at all to find. Feall, it turned out, comprised three properties, two ruined croft houses and one that looked like a new build, which my mother figured to have been raised on the site of a third croft. In one of these had lived Ursula Cecilia Heinrickson, my great-great-grandmother. 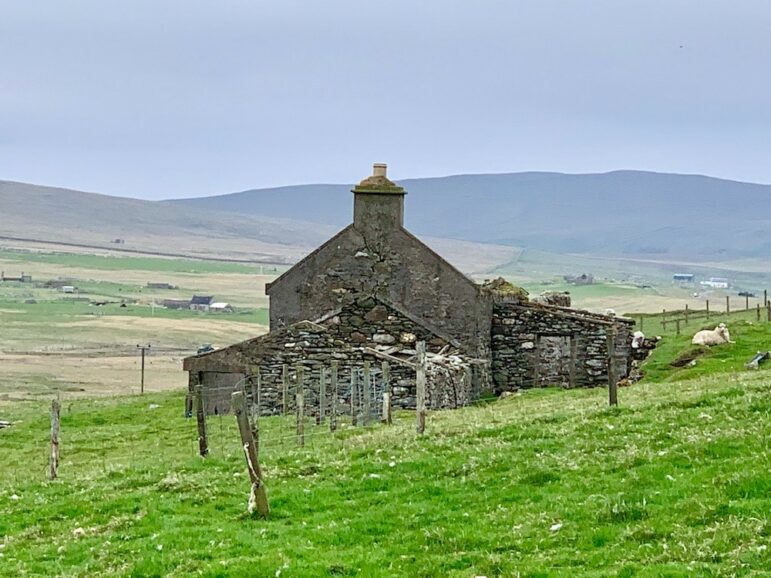 I untied the knot on the gate, and we crossed the field toward the nearest ruin. Ahead of us a whimbrel shot from the undergrowth. The building’s stonework had withstood time well, the main structures and supporting walls were in place, including the door and window lintels. Among the stones I found old bottles, the glass heavy and clouded, and a Vaseline petroleum jelly jar from the 1930s. By the gate of the second croft house lay a dead lamb, its eyes pecked out. Birds nested in alcoves of the ruins. Crofters survived on whatever they could grow or forage from the land and take from the sea. They raised animals and grew what vegetables they could: the men fished, the young women worked as “gutter girls,” hands deep in herring innards at the fishery, the old women knitted fine, woolen shawls. The 1886 Crofters Holdings Act offered some tenancy protections, but in Ursula’s time the crofters were entirely beholden to the landlords to whom they paid dues, in their case the Earl of Zetland. In time Ursula Heinrickson left the island and, somewhere along the way, dropped Ursula in favor of Cecilia and changed Heinrickson to Henderson, and as Cecilia Henderson she took a job serving tables in a large house in Edinburgh.

“I question if it was ever a viable livelihood,” said Robert Hughson, who I met and talked to at the hotel bar while I waited for my mother to come down from her room. Robert had crofted, worked as a lighthouse attendant, sold insurance, tried and failed to grow trees. Spruce from Norway and lodgepole pine, he told me; the seeds for the latter he sourced and had sent from Vancouver Island, but even they could not withstand the “salt blast.” For those who stay, life shares one thing with the crofters: they do what it takes to survive. In The Prairie in Her Eyes, Ann Daum writes of her hometown of Murdo in South Dakota: “Don’t ask me how people know. I knew. I could run a finger down the pictures in the high school yearbook, picking out who would stay and who would go.” Like Unst, Murdo is also a place where the wind blows hard all year long. 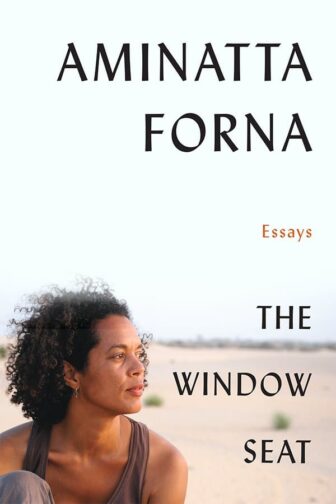 Robert’s grandfather John, or Auld Erin, had been a sixareen skipper in the late 1800s. Robert’s son had joined the outflow of islanders and lived now in New Zealand. Robert’s daughter, on the other hand, was a stayer like her father and taught junior high to the islands’ fifty children who, to attend sixth form, must leave for Lerwick or Brae, forty or sixty miles away on the main island.

Depopulation has been a concern in the Shetlands for more than half a century. In 1960, Shetlanders came up with the idea for a Hamefarin, a festival conceived as a way of reconnecting with kinfolk the world over, of letting them know they were always welcome back. Roughly a thousand descendants of Shetlanders—hamefarers—from all over the world traveled to the islands for the last Hamefarin in 2010, among them my mother.

“It’s funny you came to write about stayers, but actually everyone leaves,” remarked Gregor a day into the trip. That was the thought that had begun our journey, which we’d talked about on the ferry over when I’d said that although we lived at a time when public and media attention were focused on those who migrated, I was interested in what it was that compelled people to stay in the place they first called home, or hame. Ideas of “home” produce a cultural schism, for home is at once the focus of great nostalgia for some, equally for others home is a place they can’t wait to get away from. “Home” is somewhere you escape from, grow out of, return to. Yet even those who revere the idea of home rarely seem able adequately to describe it. I am often asked the question, Where is home? and sense that my efforts at a reply are found wanting. The reason for this, I believe, is a conceptual mismatch between me and my interlocutor on the definition of the word home. For them, those people who want an answer from me, I have discovered two things to be consistently true: “home” is always located in the past. It is not enough for me to say, “Arlington.” Also, it is a noun used strictly in the singular. The word homes is antithetical to the idea of “home.”

I am someone who can live (within reason) anywhere. So is my mother and so is my brother. Joan Didion, who is seven years older than my mother, wrote in her 1967 essay, “On Going Home”: “Sometimes I think that those of us who are now in our thirties were born into the last generation to carry the burden of ‘home.’” I don’t suppose my mother read Didion’s essay, though she is the embodiment of it, the most itinerant person I have ever known. My mother has lived in nineteen countries on five continents, first with one husband and then another, and then alone. In between she has visited dozens more, taking in new countries year by year. She has traveled with a husband and small children, she has traveled alone, by plane, train, automobile, and on foot, often to places considered unsafe. Now, frustrated by the constraints of age, she has accepted the necessity of traveling companions and will board a coach or a cruise ship, though she remains resolute in her need to leave home. When I think of this need in her, I realize I should have been unsurprised by my grandfather’s trove of travel pictures. As for me, I have to travel so often for work, that I have come to regard staying home as a luxury. Also, I am something of a homebody; it is simply that I am flexible about where exactly that home might be.

The Window Seat: Notes from a Life in Motion (Grove Atlantic) is available here.