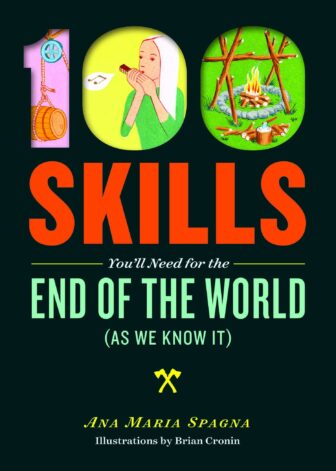 When Orion’s Enumeration department made its debut in 2013, one of the first contributions was from Ana Maria Spagna, whose writing has appeared frequently in the magazine. Her piece, “10 Skills to Hone for a Post-Oil Future,” was a surprising mix of the familiar and the nearly forgotten—from rigging and grafting, to houseguest hosting and handwriting. A new book that expands on Spagna’s Enumeration, with illustrations by Brian Cronin, is just out from Storey Publishing.

As a kid, I sat at a manual typewriter transcribing the Top 40 as Kasey Kasem counted it down on AM radio: Rod Stewart, Donna Summer, the Pointer Sisters, Billy Joel. As an adult, working on trail crew, week in and week out, I’d handwrite a list of everything that needed to go in my pack, even if it was the same as the week before: rain gear, bug net, work gloves, paperback novel, chocolate. So when Orion invited me to make a list for the magazine’s Enumeration department, I jumped right aboard, pitching a handful of ideas, and the one that stuck was “10 Skills to Hone for the Post-Oil World.”

The list was as serious and not-as-serious as the items in my trail pack were crucial and not-as-crucial. Navigating by the stars? Depends on how lost you are or how cloudy it is. Sharpening a crosscut? Depends on how many logs you need to cut. Sleeping? Well…

Work on a trail crew long enough or live in a very small place and you learn to take a perverse kind of pride in skills that aren’t universally necessary—at least not yet (hoarding, knot tying, rigging, blacksmithing).

So when Storey Publishing asked me to come up with a list of 100 skills, I was both excited and a little daunted. The challenge wasn’t coming up with 100 skills. That was a snap. I asked people in person and via e-mail and on social media and had way more than 100 skills in no time. (Several stemmed from comments in response to the original Orion piece.) The problem was the whole idea of the end of the world—“I’m no doomsdayer,” I explained to the editors. They said they got it. They said they liked the slantways sense of possibility in the original list. So it began.

Some of the skills I already had: stone working, composting, home brewing. Some I’ll likely never master: knitting (I have no fine motor skills), horse and mule handling (animals that large terrify me), cobbling (unless you count the second definition: cobbling together a living). I fought hard to keep hiding, but gave in when editors insisted upon including financial literacy. I let go of crosscut saw sharpening, as perhaps too esoteric, and accepted barbering grudgingly, knowing how poorly it goes when someone tries to cut hair with a mirror and a Swiss army knife. I practiced making cheese, researched foraging medicinal herbs, and watched a friend spinning wool. I wrote up a draft and awaited the illustrations. Anxiously.

Illustrations by Brian Cronin, used with permission of Storey Publishing.

I’ve read recent novels that describe every version of a changed world from The Year of the Flood to Station Eleven to Our Endless Numbered Days. The list could go on and on, and the survival skills they presume lie everywhere on the spectrum from Schwarzenegger to Shakespeare.

My own list leans neither Maxwell Smart-tricky (unless you count tinkering) nor Tom Brown-hardcore (unless you count dowsing). The truth is, whether you’re talking about the four horsemen or nuclear winter or climate change, thinking about the apocalypse has always been a means to changing our behavior now. What can we do to stave off the end? What can we do to make the most of the time we’ve got?

So I worried: what if the illustrator didn’t get it? What if the illustrations were too literal, too dark, too earnest, or too wacky? But as soon as I saw Brian Cronin’s sketches, I knew he got it. They’re all whimsy and speculation, imagination without grimness.

Everyone I talk to has more skills to add to the next list from soap making to sending smoke signals, from yodeling to burying the dead. That’s the whole point. Make your own list. Compare it with your friends’ lists. Conversing. Negotiating. Revising. Skills for now, skills for later.