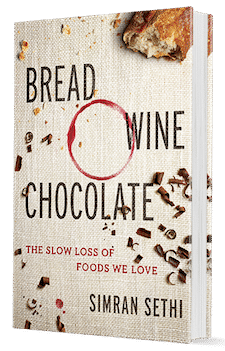 Journalist and educator Simran Sethi’s new book, Bread, Wine, Chocolate: The Slow Loss of the Foods We Love, is about the rich history—and uncertain future—of what we eat. It’s out today from HarperOne.

This is a book about food, but it’s really a book about love. It’s about that moment when you find yourself savoring something so wholly and intently you never want to let it go. I thought this love, at least in the culinary sense, could only be found in superlative places: a secret supper club in London, a hidden bistro in Paris or a roadside dhaba in Mumbai. But I know now the greatest love is found in humble places: in my morning coffee, in a morsel of bread or in a bite of chocolate. And that to pay closer attention to these ordinary pleasures isn’t just to see them anew but to experience them in a whole new way.

Four months later, I returned to the United States chubby and tired, primed for a cleanse. And primed I was as I walked through San Francisco’s Embarcadero to the headquarters of chocolate maker TCHO (pronounced “cho”), basking in the virtuous glow of the no-sugar-no-dairy-no-gluten-no-alcohol-or-cigarettes-or-anything-that-could-be-construed-as-sinful cleanse I had started days before I was to interview the company’s head chocolate maker, Brad Kintzer.

I stepped into the chocoholics’ lair and asked for Brad. (If you ever eat a TCHO chocolate bar, you’ll find a photo of him smiling beatifically on the wrapper’s inner fold.) About five minutes later, he walked out, apologized for running late and requested another 15 minutes to finish his work. He invited me to order a cup of hot chocolate from the café to pass the time and sweeten the delay: “Order whatever you want.” I thanked him, waited until he left and ordered a cup of water. I was cleansing—and virtuous. So virtuous.

To be inside the original TCHO space (they have since moved) was akin to placing myself inside a Willy Wonka dream: Simi and the Chocolate Factory. Brad brought me into the conference room and explained they were putting the finishing touches on a new hazelnut bar. The room was heady with the aromas of nuts and chocolate; broken samples were scattered all over the conference table. “Help yourself,” he said. I smiled, beatifically. “I’m okay. Thanks.”

The 20-minute interview stretched to almost two hours. I was captivated by Brad’s story, his journey from a man who had started off studying the biology of sugar maples to now making award-winning chocolate. At one point, he described the moment he shared some of that chocolate with the farmers who’d grown the cacao—men who had never before tasted a finished chocolate bar—as “one of the most sacred moments in all my life.”

I was starting to regret my cleanse.

As we wrapped up the interview, Brad asked if I wanted to tour the factory. Of course. Willy Wonka was giving me a tour of his chocolate factory. Brad and I slipped on mesh hairnets, smooshed in orange earplugs and walked into the outer perimeter of the factory where bars are molded and hand wrapped. It was chilly; the area is kept below 66 degrees Fahrenheit to maintain the consistency of the chocolate. And it was loud; Brad shouted over slappers that hit chocolate bars out of their molds, plus cooling and packing machines that churned out roughly 5,000 TCHO bars per hour.

He then pushed through a thick plastic curtain and led me into the inner sanctum, a cozier 80 degrees Fahrenheit. The aroma of chocolate grew stronger as we approached the refiner, a machine that grinds and melts solid cakes of cocoa into a warm, gooey mass.

That’s where I nearly buckled.

As Brad explained the transformation of solid into liquid, I closed my eyes. The scent of chocolate was so overwhelming, my mouth started to water. “The fat in chocolate is solid at room temperature,” he said. I swallowed; I could taste the chocolate without tasting it. “Chocolate melts just below the temperature of our mouths.”

I caressed the refiner as if I were touching a lover. The drum was so warm, the smell so intoxicating. Brad was shocked. He stopped mid-sentence and asked if he could take a picture. I was still in my hairnet, covered in various shades of brown—brown skin, brown jacket, brown bag, brown boots—looking nearly post-orgasmic. I was embarrassed, but Brad understood. He smiled and said, “We’re born loving chocolate.”

He’s right. Chocolate has been my constant companion: every birthday cake, my wedding cake, the food that got me through my divorce. It, along with coffee and the occasional cigarette, has fueled every single page of this book. But despite this love, I had never thought deeply about where it came from, or where any of my favorite foods came from, beyond a fuzzy notion of “farmers in fields” and “workers in factories.” They were people whom I considered in the abstract but did not know.

Yes, I’m friendly with the farmers who sell me eggs and seasonal produce at my local farmers’ market, but most of the people who cultivate what I consider life staples (including chocolate and coffee) don’t even live on my continent. Despite my passion for food and agriculture, and my deep care for land and people, my relationships with the foods I love have been long but not deep.

I didn’t spend most mornings thinking of where my coffee came from.

I didn’t spend any mornings thinking about where my coffee came from.

Because coffee, chocolate, bread, wine—every food we care about—is under threat. While we debate GMOs and the merits of Paleo, while we count calories and queue for Cronuts, we’re losing the foundations of food. That’s what I learned when I traveled to Rome to research challenges in modern agriculture. Embedded in every conversation about feeding people, conserving natural resources and ensuring a healthy diet, both now and in the future, is the threat of the loss of agricultural biodiversity—the reduction of the diversity in everything that makes food and agriculture possible, a shift that is the direct result of our relationship with the world around us.

Once I learned about this, I knew I had to go to the places that hold the keys to the future of food. So I quit a job I couldn’t get fired from, sold my house, gave away my car and embarked on a journey to learn how we could save the tastes we love.

“Eating,” author, farmer and philosopher Wendell Berry says, “is an agricultural act.” Food connects us to all living things, and to the lineage of who we are and where we come from. It isn’t farmers in fields and workers in factories who bring us our food; it’s people like us. People who dedicate their lives to creating something that we take into our bodies. They transform nature into culture, as what they touch becomes part of us. This intimacy is astonishing and humbling.

We treat our food system as an abstract thing; however, it’s a dynamic entity made up of these relationships, ones I have come to fully appreciate through the journeys on these pages. But this isn’t where I started. The first wine I loved was a peach Bartles & Jaymes wine cooler. The first coffee I tolerated—heavily diluted with half-and-half and sugar, and chased with a glazed doughnut—was at the world’s original Krispy Kreme. My favorite chocolate bars were Whatchamacallit, Twix and Nestlé Crunch—in that order. Until a year and a half ago, all I knew of coffee was that I preferred a cappuccino to a latte. But now I grill baristas about coffee origins, beg friends to bring back chocolate from various countries and quiz breweries about the source of their hops.

I am not trying to be precious. I have learned, by traveling to the places where some of our favorite foods and drinks began, that these foods are precious. I had no idea how hard it was to get a coffee bean from a forest in Ethiopia to my local café, or how much work and care went into making a premium bar of chocolate or a hearty loaf of bread. I had no idea how endangered the best, most delicious versions of these things are. This awareness is what makes them precious, and, meal by meal, makes my life better.

By helping you more deeply understand foods that are already a part of your life, and develop a sensory map for exploring new ones, this book will enable you to discover and appreciate flavors you may not have experienced. It will give you the tools to define your own deliciousness—and reach for more.

That’s been this journey’s greatest reward: finding a new appreciation for what I already loved. And understanding what it takes to sustain and save that love—in farms, on our plates and in life—lies in recognition that how we eat is a reflection of how we live. By sustaining agricultural biodiversity, we sustain ourselves.

“Eating with the fullest pleasure—pleasure, that is, that does not depend on ignorance,” Berry adds, “is perhaps the profoundest enactment of our connection with the world. In this pleasure we experience and celebrate our dependence and our gratitude, for we are living from mystery, from creatures we did not make and powers we cannot comprehend.”

The piece above is excerpted from Bread, Wine, Chocolate: The Slow Loss of Foods We Love. Copyright © 2015 by Simran Sethi. Reprinted with permission by HarperOne, a division of HarperCollinsPublishers. Author photograph by Cem Ersavci for Dumbo Feather.