“I T IS NO MEASURE of health to be well adjusted,” goes the oft quoted but unverifiable aphorism from the Indian philosopher Krishnamurti, “to a profoundly sick society.”

Richard Powers’s new novel Bewilderment takes this notion and embodies it in the form of Robin, a nine-going-on-ten-year-old boy alert to the animated more-than-human world that surrounds him, and enraged when others don’t accept it. Recognizing life where others don’t is a tether between Robin and his father, Theo, an astrobiologist in search of life beyond the bounds of our home planet, who listens for biosignatures in what otherwise appears to be a void.

Two years earlier, an accident caused the boy to lose his mother and, for Theo, his beloved wife. Both are thick with grief. Yet the domestic tale reaches ambitiously beyond the traditional family bond to explore a country faltering as its citizens get lost in a mire of distractions, drowning in information but unable to recognize greater connections of kinship that support them.

The boy and the man sometimes seem to be versions of the same person, both at odds with most of the humans around them. Robin’s outbursts at school become violent and the answer, officials insist, is medication. Theo, Krishnamurti style, can’t figure out why he should force his son to become better adjusted to the culture they live in. He seeks medicine for his son in the woods and under the stars. But a medical trial offers promise to retrain Robin’s thinking using the recorded brain patterns of others, including those of his dead mother, at moments when she was prompted to think about ecstasy.

Even in its intimacy, as Theo and Robin’s lives unfold over the course of a year, readers find the larger recurring themes that thread throughout Powers’s work. Powers won the Pulitzer Prize in nonfiction for his 2018 novel The Overstory, which told an epic tale of eight individuals who discover new worlds, and new conflicts, when they recognize the power of trees around them. What shifts when you start considering the lives and rights of those beyond humans? So too in Bewilderment, which also explores what can happen when an individual’s inexplicable joy for life becomes contagious, as in Generosity: An Enhancement, and how the frontiers of brain science, and all we know and don’t know, translate to our individual lives, as in The Echo Maker.

But while this book’s message about learning how to listen—how to tune the brain to what is, and what may be, around us, and to be changed by the listening—is similar to The Overstory’s, it is a much quieter book with a smaller scope, and it lacks the same subtlety in its telling.

Then again, we don’t live in subtle times. The book’s backdrop of current events doesn’t veer far from the nightly news. A belligerent president who’s created a national broadcasting system to make tweet-like pronouncements. A contested election. A slew of extreme weather events and disease outbreaks. An inspiring European teen activist named Inga with a “superpower” that is not unlike Robin’s.

But it is by leaving this troubled world and taking us to interplanetary places that Powers brings Bewilderment home. “They share a lot, astronomy and childhood,” Powers writes. Both are voyages across huge distances. And Powers takes us on these journeys as Theo and Robin spend evenings venturing to other planets, fueled by knowledge from Theo’s work and a house full of science fiction novels and creative speculation. They try to answer the Fermi paradox: Where is everyone?

In the answering, they visit planets with beings so smart they might cloak themselves from probing human eyes. Another is deeply advanced in every way but technology. One planet’s inhabitants listen in color as the beat of their eight hearts tune them into time at an intricate level of synesthesia. They wonder if there are planets whose creatures went so wayward that their occupants created Earth as an Eden to start over, to see if we could get it right.

We’re not, according to Powers, proving up to the task. 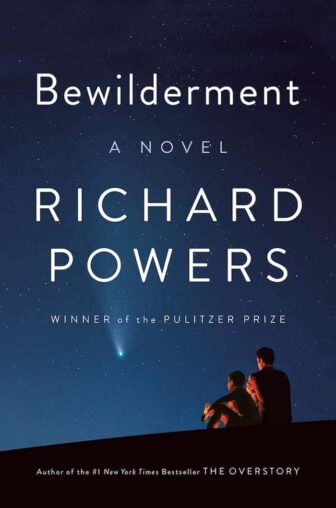 Perhaps our exponentially exploding bits of information do not translate to knowledge. Perhaps it is creating a “power too precarious to last.” We experiment, ever hungry for more knowledge, more power, like the white-coated doctors in the 1958 short story “Flowers for Algernon,” which served as inspiration for Bewilderment.

“You know what’s happening,” Powers writes. “Everyone knows, despite the code of silence. This endless gift of a place is going away.” Bewilderment is an exercise in grief, personal and planetary. It is a practice in radical empathy. It is an exploration of what loneliness bears, whether an individual who has experienced a grave loss or an entire species on a singular planet that has lost its way, forgotten its connections, within and beyond its earthly bounds.

For those who share the weight that Powers carries, about the future fate of this planet and all its inhabitants—from the rocks that humans stack into cairns to the mysterious songmakers of the forest to these familiar yet unknowable humans we give birth to—do not expect forgiveness or atonement in Bewilderment. Instead, this book will bewilder you in the best ways, not in some traditional definition of the word, but rather, as in be-wilder, to return to the wild, sometimes only possible by shifting your perspective rapidly from the astral plane to the microscopic. Powers takes us along as we travel the spectrum between these two vantages in an attempt to provide some antidote to the trouble we’re in. It’s a love without reassurance, but still a cracked-open door to possibility.